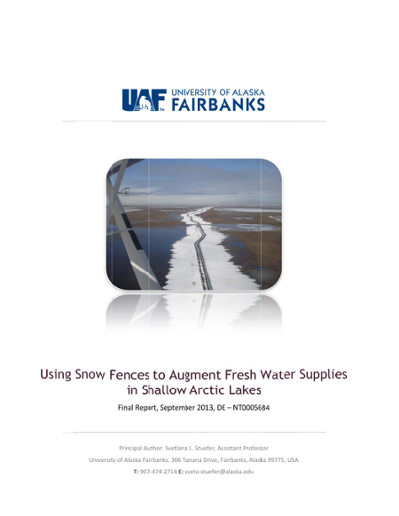 This project was funded by the U.S. Department of Energy, National Energy Technology Laboratory (NETL) to address environmental research questions specifically related to Alaska’s oil and gas natural resources development. The focus of this project was on the environmental issues associated with allocation of water resources for construction of ice roads and ice pads. Earlier NETL projects showed that oil and gas exploration activities in the U.S. Arctic require large amounts of water for ice road and ice pad construction. Traditionally, lakes have been the source of freshwater for this purpose. The distinctive hydrological regime of northern lakes, caused by the presence of ice cover and permafrost, exerts influence on lake water availability in winter. Lakes are covered with ice from October to June, and there is often no water recharge of lakes until snowmelt in early June. After snowmelt, water volumes in the lakes decrease throughout the summer, when water loss due to evaporation is considerably greater than water gained from rainfall. This balance switches in August, when air temperature drops, evaporation decreases, and rain (or snow) is more likely to occur. Some of the summer surface storage deficit in the active layer and surface water bodies (lakes, ponds, wetlands) is recharged during this time. However, if the surface storage deficit is not replenished (for example, precipitation in the fall is low and near‐surface soils are dry), lake recharge is directly affected, and water availability for the following winter is reduced. In this study, we used snow fences to augment fresh water supplies in shallow arctic lakes despite unfavorable natural conditions. We implemented snow‐control practices to enhance snowdrift accumulation (greater snow water equivalent), which led to increased meltwater production and an extended melting season that resulted in lake recharge despite low precipitation during the years of the experiment. For three years (2009, 2010, and 2011), we selected and monitored two lakes with similar hydrological regimes. Both lakes are located 30 miles south of Prudhoe Bay, Alaska, near Franklin Bluffs. One is an experimental lake, where we installed a snow fence; the other is a control lake, where the natural regime was preserved. The general approach was to compare the hydrologic response of the lake to the snowdrift during the summers of 2010 and 2011 against the “baseline” conditions in 2009. Highlights of the project included new data on snow transport rates on the Alaska North Slope, an evaluation of the experimental lake’s hydrological response to snowdrift melt, and cost assessment of snowdrift‐generated water. High snow transport rates (0.49 kg/s/m) ensured that the snowdrift reached its equilibrium profile by winter's end. Generally, natural snowpack disappeared by the beginning of June in this area. In contrast, snow in the drift lasted through early July, supplying the experimental lake with snowmelt when water in other tundra lakes was decreasing. The experimental lake retained elevated water levels during the entire open‐water season. Comparison of lake water volumes during the experiment against the baseline year showed that, by the end of summer, the drift generated by the snow fence had increased lake water volume by at least 21–29%. We estimated water cost at 1.9 cents per gallon during the first year and 0.8 cents per gallon during the second year. This estimate depends on the cost of snow fence construction in remote arctic locations, which we assumed to be at $7.66 per square foot of snow fence frontal area. The snow fence technique was effective in augmenting the supply of lake water during summers 2010 and 2011 despite low rainfall during both summers. Snow fences are a simple, yet an effective, way to replenish tundra lakes with freshwater and increase water availability in winter. This research project was synergetic with the NETL project, “North Slope Decision Support System (NSDSS) for Water Resources Planning and Management.” The results of these projects were implemented in the NSDSS model and added to the annual water budget. This implementation allows one to account for snowdrift contributions during ice road planning with the NSDSS and assists with mitigating those risks associated with potentially unfavorable climate and hydrological conditions (that is, surface storage deficit and/or low precipitation).