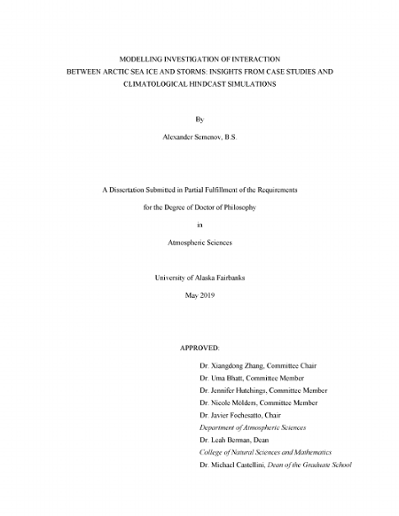 The goal of this study is to improve understanding of atmosphere, sea ice, and ocean interactions in the context of Arctic storm activities. The reduction of Arctic sea ice extent, increase in ocean water temperatures, and changes of atmospheric circulation have been manifested in the Arctic Ocean along with the large surface air temperature increase during recent decades. All of these changes may change the way in which atmosphere, sea ice, and ocean interact, which may in turn feedback to Arctic surface air warming. To achieve the goal, we employed an integrative approach including analysis of modeling simulation results and conducting specifically designed model sensitivity experiments. The novelty of this study is linking synoptic scale storms to large-scale changes in sea ice and atmospheric circulation. The models were used in this study range from the regional fully coupled Arctic climate model HIRHAM-NAOSIM to the ocean-sea ice component model of the Community Earth System Model CESM and the Weather Research and Forecasting (WRF) model. Analysis of HIRHAM-NAOSIM simulation outputs shows regionally dependent variability of storm count with a higher number of storms over the Atlantic side than over the Pacific side. High-resolution simulations also reproduce higher number of storms than lower resolution reanalysis dataset. This is because the high-resolution model may capture more shallow and small size storms. As an integrated consequence, the composite analysis shows that more numerous intense storms produce low-pressure systems centered over the Barents-Kara-Laptev seas and the Chukchi-East Siberian seas, leading to anomalous cyclonic circulation over the Atlantic Arctic Ocean and Pacific Arctic Ocean. Correspondingly, anomalous sea ice transport occurs, enhancing sea ice outflow out of the Barents-Kara-Laptev sea ice and weakening sea ice inflow into the Chukchi-Beaufort seas from the thick ice area north of the Canadian Archipelago. This change in sea ice transport causes a decrease in sea ice concentration and thickness in these two areas. However, energy budget analysis exhibits a decrease in downward net sea ice heat fluxes, reducing sea ice melt, when more numerous intense storms occur. This decrease could be attributed to increased cloudiness and destabilized atmospheric boundary layer associated with intense storms, which can result in a decrease in downward shortwave radiation and an increase in upward turbulent heat fluxes. The sea ice-ocean component CICE-POP of Community Earth System Model (CESM) was used to conduct sensitivity experiment to examine impacts of two selected storms on sea ice. CICE-POP is generally able to simulate the observed spatial distribution of the Arctic sea-ice concentration, thickness, and motion, and interannual variability of the Arctic sea ice area for the period 1979 to 2011. However, some biases still exit, including overestimated sea-ice drift speeds, particularly in the Transpolar Drift Stream, and overestimated sea-ice concentration in the Atlantic Arctic but slightly underestimated sea ice concentration in the Pacific Arctic. Analysis of CICE-POP sensitivity experiments suggests that dynamic forcing associated with the storms plays more important driving role in causing sea ice changes than thermodynamics does in the case of storm in March 2011, while both thermodynamic and dynamic forcings have comparable impacts on sea ice decrease in the case of the August 2012. In case of March 2011 storm, increased surface winds caused the reduction of sea ice area in the Barents and Kara Seas by forcing sea ice to move eastward. Sea ice reduction was primarily driven by mechanical processes rather than ice melting. On the contrary, the case study of August 2012 storm, that occurred during the Arctic summer, exemplified the case of equal contribution of mechanical sea ice redistribution of sea ice in the Chukchi - East Siberian - Beaufort seas and melt in sea ice reduction. To understand the impacts of the changed Arctic environment on storm dynamics, we carried out WRF model simulations for a selected Arctic storm that occurred in March 2011. Model output highlight the importance of both increased surface turbulent heat fluxes due to sea ice retreat and self-enhanced warm and moist air advection from the North Atlantic into the Arctic. These external forcing factor and internal dynamic process sustain and even strengthen atmospheric baroclinicity, supporting the storm to develop and intensify. Additional sensitivity experiments further suggest that latent heat release resulting from condensation/precipitation within the storm enhances baroclinicity aloft and, in turn, causes a re-intensification of the storm from its decaying phase.