The Public's Perspective— Justice Administration 1980: A Survey of Public Opinion 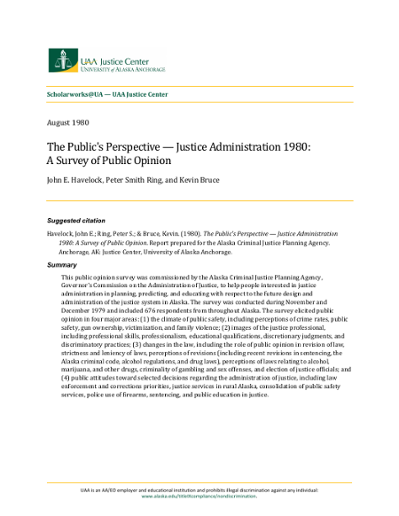 This public opinion survey was commissioned by the Alaska Criminal Justice Planning Agency, Governor's Commission on the Administration of Justice, to help people interested in justice administration in planning, predicting, and educating with respect to the future design and administration of the justice system in Alaska. The survey was conducted during November and December 1979 and included 676 respondents from throughout Alaska. The survey elicited public opinion in four major areas: (1) the climate of public safety, including perceptions of crime rates, public safety, gun ownership, victimization, and family violence; (2) images of the justice professional, including professional skills, professionalism, educational qualifications, discretionary judgments, and discriminatory practices; (3) changes in the law, including the role of public opinion in revision of law, strictness and leniency of laws, perceptions of revisions (including recent revisions in sentencing, the Alaska criminal code, alcohol regulations, and drug laws), perceptions of laws relating to alcohol, marijuana, and other drugs, criminality of gambling and sex offenses, and election of justice officials; and (4) public attitudes toward selected decisions regarding the administration of justice, including law enforcement and corrections priorities, justice services in rural Alaska, consolidation of public safety services, police use of firearms, sentencing, and public education in justice.