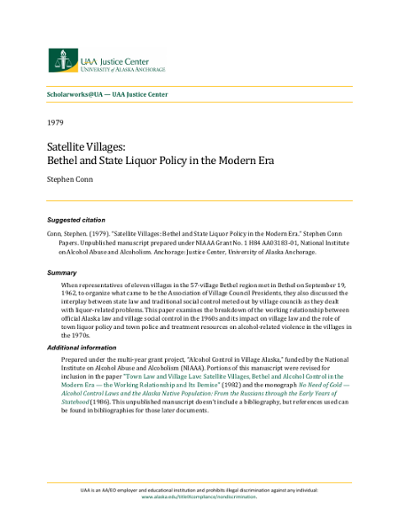 When representatives of eleven villages in the 57-village Bethel region met in Bethel on September 19, 1962, to organize what came to be the Association of Village Council Presidents, they also discussed the interplay between state law and traditional social control meted out by village councils as they dealt with liquor-related problems. This paper examines the breakdown of the working relationship between official Alaska law and village social control in the 1960s and its impact on village law and the role of town liquor policy and town police and treatment resources on alcohol-related violence in the villages in the 1970s.

Prepared under the multi-year grant project, “Alcohol Control in Village Alaska,” funded by the National Institute on Alcohol Abuse and Alcoholism (NIAAA). Portions of this manuscript were revised for inclusion in the paper "Town Law and Village Law: Satellite Villages, Bethel and Alcohol Control in the Modern Era — the Working Relationship and Its Demise" (1982) (http://hdl.handle.net/11122/7352) and the monograph No Need of Gold — Alcohol Control Laws and the Alaska Native Population: From the Russians through the Early Years of Statehood (1986) (http://hdl.handle.net/11122/7353). This unpublished manuscript doesn’t include a bibliography, but references used can be found in bibliographies for those later documents.

[Introduction] / [September 19, 1962 meeting: Transcript excerpts with comments] / The 1963 Meeting [September 19, 1963] / (Excerpts From 1965 Meeting [September 18, 1965]) (AVCP, 1965: 9–11) / Accidents and Deaths a Focal Point / Translation of an interest into a demand / Village Council Reaction to the New Rules on Drinking / Drunken Comportment and the Law / [1967 Meeting — September 19–23, 1967] / The Reign of Councils / The problem from a traditional perspective / The Village Council and Its Social Reality / Development of the law in Bethel / Epilogue / Appendix 1 [notes from interviews with residents of Kwigillingok, Newtok, Kipnuk, Kongiganak, and Hooper Bay]