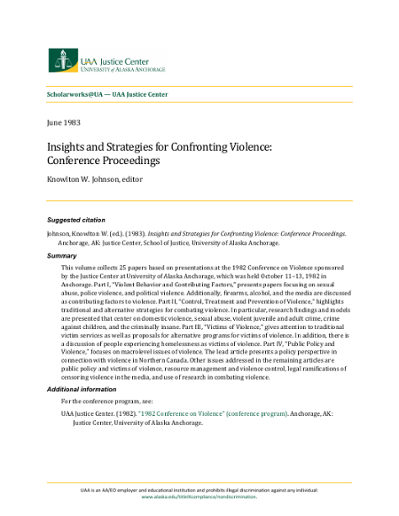 This volume collects 25 papers based on presentations at the 1982 Conference on Violence sponsored by the Justice Center at University of Alaska Anchorage, which was held October 11–13, 1982 in Anchorage. Part I, “Violent Behavior and Contributing Factors,” presents papers focusing on sexual abuse, police violence, and political violence. Additionally, firearms, alcohol, and the media are discussed as contributing factors to violence. Part II, “Control, Treatment and Prevention of Violence,” highlights traditional and alternative strategies for combating violence. In particular, research findings and models are presented that center on domestic violence, sexual abuse, violent juvenile and adult crime, crime against children, and the criminally insane. Part III, “Victims of Violence,” gives attention to traditional victim services as well as proposals for alternative programs for victims of violence. In addition, there is a discussion of people experiencing homelessness as victims of violence. Part IV, “Public Policy and Violence,” focuses on macrolevel issues of violence. The lead article presents a policy perspective in connection with violence in Northern Canada. Other issues addressed in the remaining articles are public policy and victims of violence, resource management and violence control, legal ramifications of censoring violence in the media, and use of research in combating violence.

"Foreword: Introduction to the Conference" by Tony Knowles, John Brownell, and John E. Angell / "Preface" by Knowlton W. Johnson / PART I. VIOLENT BEHAVIOR AND CONTRIBUTING FACTORS / "Psychological Makeup of the Sexual Abuser" by James Harper / "The Police and Deadly Force" by Raymond T. Galvin / "Political Violence" by Andrea R.C. Helms / "Firearms and Violent Crime" by Philip J. Cook / "Alcohol and Violence" by James Gorman / "The Effects of Media Violence" by Douglas Barry / "Media, Women, and Violence: The Consequences of Our Image" by M.R. Katzke / PART II. CONTROL, TREATMENT, AND PREVENTION OF VIOLENCE / "Criminal Justice and Violence in the 1980's" by Jim Mayer, Dana Fabe, and John Pugh / "Criminalizing Domestic Violence: A Study of Prosecutorial Action Taken in Anchorage, Alaska" by Knowlton W. Johnson, Serena Shores Partch, and Mike Marsh / "Prosecuting Sexual Abusers" by Victor Krumm / "How the Insanity Acquittal Retards Treatment" by Robert A. Fein / "Working with Men Who Batter: Where Do We Go from Here?" by Lance C. Egley / "Causes and Treatment of Violence Involving Children" by Mary Huelsman and Robert Bowers / "Response to Incest: An Argument for Understanding" by James Kenneth Duff / "Prevention of Violence: An Interdisciplinary Approach" by C. Ray Jeffery / PART III. VICTIMS OF VIOLENCE / "Victim Services Coordination in Alaska" by Betsey W. McGuire / "Self-Help for Victims of Violence: A Proposal" by Peter W. Dowrick / "An Investigation of Alcohol and Drug Abuse among Battered Women in Anchorage" by David Basham and Denise Brothers / "Restitution to Victims of Violent and Property Crimes" by Jeanne A. Bussey / "Violence on Anchorage's Fourth Avenue from the Perspective of Street People" by Michael Huelsman / PART IV. PUBLIC POLICY AND VIOLENCE / "Violence and the Administration of Criminal Justice in Northern Canada" by Harold W. Finkler / "Violence, Victimization, and Social Change: A Socio-Cultural and Public Policy Analysis" by Emilio C. Viano / "Public Policy, Resources, and Violence" by Don Clark / "Censoring Violence" by John E. Havelock / "Combating Violence in Alaska: Use of Research in Planning for Change" by Knowlton W. Johnson