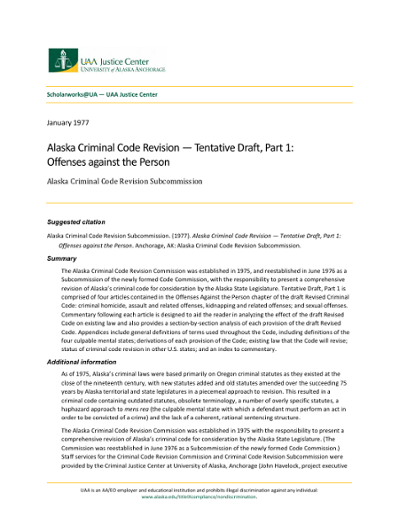 The Alaska Criminal Code Revision Commission was established in 1975, and reestablished in June 1976 as a Subcommission of the newly formed Code Commission, with the responsibility to present a comprehensive revision of Alaska’s criminal code for consideration by the Alaska State Legislature. Tentative Draft, Part 1 is comprised of four articles contained in the Offenses Against the Person chapter of the draft Revised Criminal Code: criminal homicide, assault and related offenses, kidnapping and related offenses; and sexual offenses. Commentary following each article is designed to aid the reader in analyzing the effect of the draft Revised Code on existing law and also provides a section-by-section analysis of each provision of the draft Revised Code. Appendices include general definitions of terms used throughout the Code, including definitions of the four culpable mental states; derivations of each provision of the Code; existing law that the Code will revise; status of criminal code revision in other U.S. states; and an index to commentary.