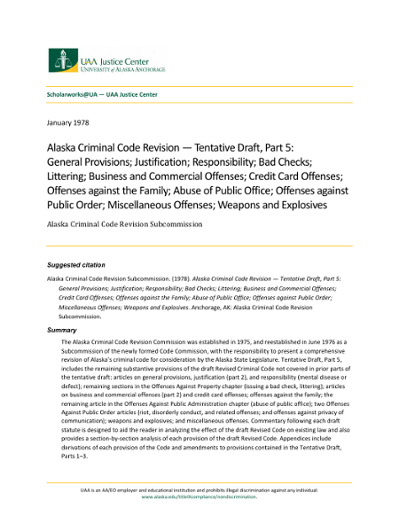 The Alaska Criminal Code Revision Commission was established in 1975, and reestablished in June 1976 as a Subcommission of the newly formed Code Commission, with the responsibility to present a comprehensive revision of Alaska’s criminal code for consideration by the Alaska State Legislature. Tentative Draft, Part 5, includes the remaining substantive provisions of the draft Revised Criminal Code not covered in prior parts of the tentative draft: articles on general provisions, justification (part 2), and responsibility (mental disease or defect); remaining sections in the Offenses Against Property chapter (issuing a bad check, littering); articles on business and commercial offenses (part 2) and credit card offenses; offenses against the family; the remaining article in the Offenses Against Public Administration chapter (abuse of public office); two Offenses Against Public Order articles (riot, disorderly conduct, and related offenses; and offenses against privacy of communication); weapons and explosives; and miscellaneous offenses. Commentary following each draft statute is designed to aid the reader in analyzing the effect of the draft Revised Code on existing law and also provides a section-by-section analysis of each provision of the draft Revised Code. Appendices include derivations of each provision of the Code and amendments to provisions contained in the Tentative Draft, Parts 1–3.