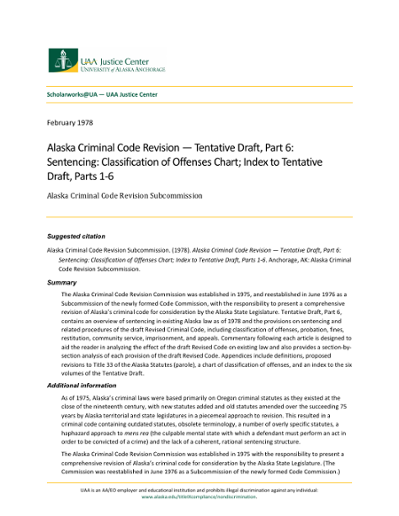 The Alaska Criminal Code Revision Commission was established in 1975, and reestablished in June 1976 as a Subcommission of the newly formed Code Commission, with the responsibility to present a comprehensive revision of Alaska’s criminal code for consideration by the Alaska State Legislature. Tentative Draft, Part 6, contains an overview of sentencing in existing Alaska law as of 1978 and the provisions on sentencing and related procedures of the draft Revised Criminal Code, including classification of offenses, probation, fines, restitution, community service, imprisonment, and appeals. Commentary following each article is designed to aid the reader in analyzing the effect of the draft Revised Code on existing law and also provides a section-by-section analysis of each provision of the draft Revised Code. Appendices include definitions, proposed revisions to Title 33 of the Alaska Statutes (parole), a chart of classification of offenses, and an index to the six volumes of the Tentative Draft.