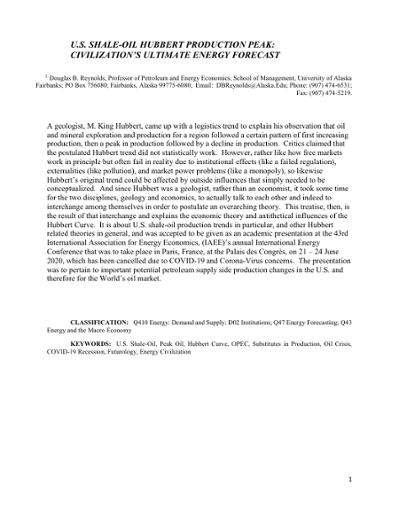 This treatise is an addendum to Reynolds’ (2011). It looks at the U.S. shale-oil production trend, and specifically at the Hubbert peak of that trend. Simmons (2005), Deffeyes (2001), Hubbert, (1962), Norgaard (1990) and Campbell (1997), among others show how there can be a peak in oil production. Reynolds (2002, 2009) explains the economic and cost theory for how and why the Hubbert Curve works, including how the information and depletion effects create such a curve. Nevertheless, Maugeri (2007), Adelman and Lynch (1997), and Lynch (2002) suggest that one should never curve fit an oil production trend, contrary to most economic disciplines where curve fitting using econometrics is the norm. Although, as of early 2020 the COVID-19 recession is greatly affecting petroleum markets. Nevertheless, the Hubbert supply trend is relevant. Also, Reynolds and Umekwe (2019) show that shale-gas and shale-oil can be compliments or substitutes in production. Based on that relationship, once the U.S. shale-oil peak occurs, it may be the world’s ultimate Hubbert peak with much smaller and lower Hubbert cycles thereafter. Worldwide petroleum institutions and strategies will also change. This treatise estimates a U.S. shale-oil Hubbert peak, scrutinizes the Hubbert related theories and explores oil price forecasts, taking into account medium run COVID-19 oil demand effects.

A geologist, M. King Hubbert, came up with a logistics trend to explain his observation that oil and mineral exploration and production for a region followed a certain pattern of first increasing production, then a peak in production followed by a decline in production. Critics claimed that the postulated Hubbert trend did not statistically work. However, rather like how free markets work in principle but often fail in reality due to institutional effects (like a failed regulation), externalities (like pollution), and market power problems (like a monopoly), so likewise Hubbert’s original trend could be affected by outside influences that simply needed to be conceptualized. And since Hubbert was a geologist, rather than an economist, it took some time for the two disciplines, geology and economics, to actually talk to each other and indeed to interchange among themselves in order to postulate an overarching theory. This treatise, then, is the result of that interchange and explains the economic theory and antithetical influences of the Hubbert Curve. It is about U.S. shale-oil production trends in particular, and other Hubbert related theories in general, and was accepted to be given as an academic presentation at the 43rd International Association for Energy Economics, (IAEE)’s annual International Energy Conference that was to take place in Paris, France, at the Palais des Congrès, on 21 – 24 June 2020, which has been cancelled due to COVID-19 and Corona-Virus concerns. The presentation was to pertain to important potential petroleum supply side production changes in the U.S. and therefore for the World’s oil market.