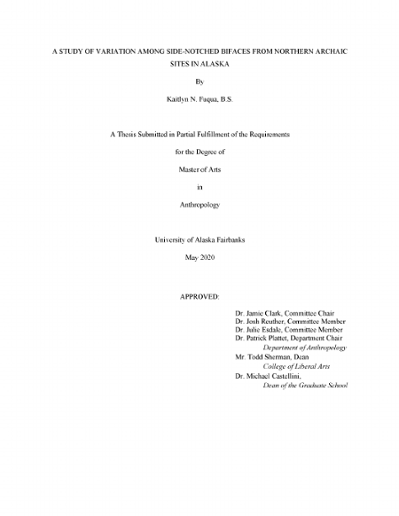 An Alaskan archaeological tradition, the Northern Archaic, (~6,000-1,000 cal years BP) is often identified based on the presence of side-notched bifaces. Variation among these bifaces, commonly referred to as projectile points, is not well understood. This study examines morphological and functional variability among a sample of 209 notched bifaces from 63 Northern Archaic sites located in central and northern Alaska. The nature and extent of variability were examined on several scales, including: 1) across ecological regions of Alaska, 2) throughout the mid-Holocene (6,000-1,000 cal years BP), and 3) within a single site (the Ratekin site, HEA-187). Morphological variation was examined using metric and nonmetric variables, including length, width, thickness, and raw material type. This study also employs a 2-D geometric morphometric landmark based analysis, which is intended to provide a less subjective view of variation in tool morphology. Side-notched bifaces in the sample show a large degree of variation, both across sites and within the Ratekin site. There are some differences in shape among bifaces from Polar and Boreal regions of Alaska, which may indicate regional varieties. There appears to be some variation in the degree of standardization in side-notched biface production over time; between 3000-2,000 cal years BP, there is a decline in variability across the majority of the metric shape variables, suggesting a greater degree of standardization. Functional variability was assessed using three lines of evidence: breakage patterns, macroscopic wear patterns on the distal end, and a Dart-Arrow Index. Sixty percent of the side-notched bifaces in the sample exhibit some breakage, most of which were lateral/transverse breaks located on the shoulders and neck of the tool. Biface tips show evidence of use and frequent rejuvenation. Similar breakage and use patterns, and dart-arrow values were found across the ecological regions, throughout the mid-Holocene, and within the Ratekin site sample. Despite the shifts in morphology identified at regional and temporal scales, this indicates that side-notched bifaces served a similar function at all scales examined. Variation in side-notched bifaces was also considered from the perspective of human behavioral ecology, focusing specifically on risk management and how strategies for mitigating risk may be reflected in lithic assemblages (through invention, innovation, and standardization). Other risk management strategies employed during the Northern Archaic may include communal hunting, subsistence diversification, and high residential mobility. Within this framework, the increased standardization among side-notched bifaces during 3,000-2,000 cal years BP may be a reflection of a risk-averse behavior, supported by evidence of subsistence diversification at Northern Archaic sites after 4,000 cal years BP.