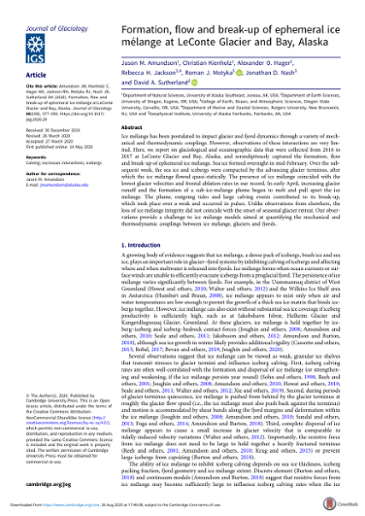 Ice mélange has been postulated to impact glacier and fjord dynamics through a variety of mechanical and thermodynamic couplings. However, observations of these interactions are very limited. Here, we report on glaciological and oceanographic data that were collected from 2016 to 2017 at LeConte Glacier and Bay, Alaska, and serendipitously captured the formation, flow and break-up of ephemeral ice mélange. Sea ice formed overnight in mid-February. Over the subsequent week, the sea ice and icebergs were compacted by the advancing glacier terminus, after which the ice mélange flowed quasi-statically. The presence of ice mélange coincided with the lowest glacier velocities and frontal ablation rates in our record. In early April, increasing glacier runoff and the formation of a sub-ice-mélange plume began to melt and pull apart the ice mélange. The plume, outgoing tides and large calving events contributed to its break-up, which took place over a week and occurred in pulses. Unlike observations from elsewhere, the loss of ice mélange integrity did not coincide with the onset of seasonal glacier retreat. Our observations provide a challenge to ice mélange models aimed at quantifying the mechanical and thermodynamic couplings between ice mélange, glaciers and fjords.

© The Author(s), 2020. Published by Cambridge University Press. This is an Open Access article, distributed under the terms of the Creative Commons Attribution-NonCommercial-ShareAlike licence (http://creativecommons.org/licenses/by-nc-sa/4.0/), which permits non-commercial re-use, distribution, and reproduction in any medium, provided the same Creative Commons licence is included and the original work is properly cited. The written permission of Cambridge University Press must be obtained for commercial re-use. Supplementary material. The supplementary material for this article can be found at https://doi.org/10.1017/jog.2020.29