Characterization and washability studies of raw coal from the Little Tonzona Field, Alaska 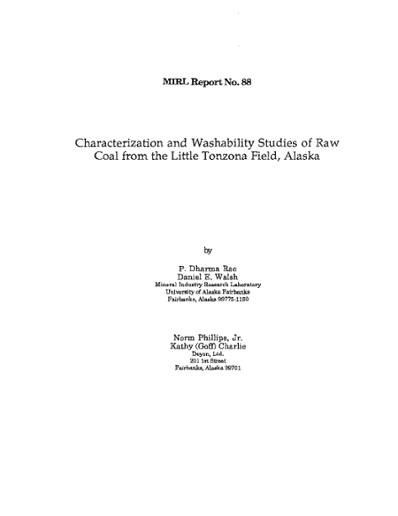 Coal occurs in an isolated exposure of Tertiary, non-marine sedimentary rocks along the southwest bank of the Little Tonzona River, near Farewell, Alaska. The Little Tonzona River coal field is located approximately 150 air miles northwest of Anchorage, Alaska, and 210 air miles southwest of Fairbanks, Alaska; near the boundaries of Denali National Park. The Alaska Railroad and the Parks Highway are approximately 100 air miles from the coal field at their nearest point. The village of McGrath, on the Kuskokwim River, is located approximately 90 miles to the west (1). An impressive outcrop of coal-bearing Tertiary sediments is exposed for a distance of more than 275 feet on the west bank of the Little Tonzona River (Figure 1). More than seven coal beds, ranging in thickness from 3 feet ta 30 feet, with a cumulative thickness of over 134 feet, are interbedded with clay beds up to 40 feet thick. The clays are fine textured, extremely plastic, light grey to nearly white bentonites andlor tonsteins. Doyon Ltd., an ANSCA Native Corporation, holds land selections covering the inferred limits of the coal field. During 1980 and 1981, Doyon entered into exploration agreements with McIntyre Mines Inc. of Nevada. The two season exploration program took place from June 1,1980 through August 22,1980 and from May 27,1981 through August 22, 1981. During the 1980 field season, geologic mapping, prospecting, stratigraphy, trenching and bulk sampling of all coal outcrops were performed. This produced a total of 34 samples, which were taken for analysis. In 1981, six diamond drill holes with a cumulative length of 2,935 feet were completed. Core recovery was close to 90%, and a total of 147 coal samples, which represented 802.8 cumulative feet of coal, were taken for analysis. The exploration program confirmed a strike length of over 3 miles to the southwest from the main river bank exposure. Northward extension is unknown at this time. Although outcrop exposure is poor away from the river banks, burnout zones resulting from past coal bed fires form a resistant, recognizable on strike feature in the relatively unindurated Tertialy sequence. The appearance of these burnout zones along strike is often the only surface indication of the buried coal-bearing strata. Well preserved plant fossil impressions in the baked clays date the deposit as probable Miocene (2). Coal characterization and washability studies were performed on all coal samples by the Mineral Industry Research Laboratory of the University of Alaska Fairbanks. This work was conducted under the direction of Dr. P.D. Rao, Professor of Coal Technology.