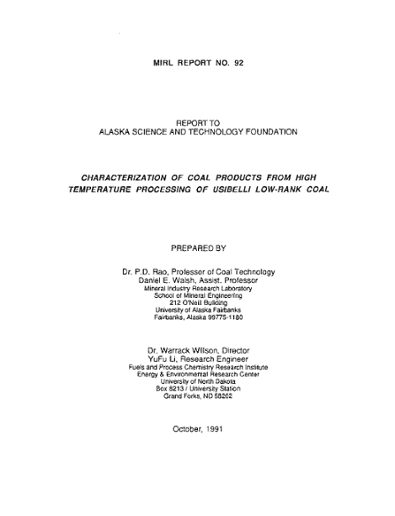 This research project was conducted in association with Gilbert/Commonwealth Inc. as part of an overall techno-economic assessment of high temperature drying of low-rank coals. This report discusses the characteristics of the dried/pyrolyzed products of two high temperature, evaporative processes and the dried product from a hydrothermal process. The long term goal of this and other coal drying studies conducted at MIRL, was to define drying technologies that have significant and real potential to competitively move Alaska's, low-rank coals (LRCs) into the export, steam coal market of the Pacific Rim. In 1990, Japan imported 33 million metric tons (mt) of steam coal with an additional 39 million mt imported by other Far East nations(2). Australia dominates the export steam coal market to these Pacific Rim countries and exported 48 million mt in 1990 and an additional 61 million mt of metallurgical coal(2). The worldwide steam coal export market has been expanding rapidly, from 20 million mt in 1973 to 150 million mt in 1989, and is expected to double to nearly 300 million mt by the end of the century(3). Could Alaska capture only 3% of the projected new world steam coal market, which is not an unreasonable expectation, the value of the state's coal exports would soar from nominally $28 million per year to over $100 million per year. However, without development of economical methods for drying/stabilizing Alaskan LRCs, the only increase in export of Alaskan coals may be from the few "higher rank" coals within a "reasonable" transport range of the existing Alaska rail system or tidewater. Presently the coal from the Usibelli Coal Mine is the only low-rank coal exported internationally as a steam coal; primarily for its blending properties with other coal to improve combustion. But for Alaskan low-rank coals to truly stand on their own merits, economical drying processes must be developed that produce a physically and chemically stable dried product. The technologies that have the most potential for increasing the use of Alaskan coals are those that can reduce the moisture content of these coals economically, and produce a fuel that is accepted in the international market place. Drying technologies will no doubt differ, depending on the end use of the fuel; be it dried lump coal, briquettes or pellets for pulverized coal or stoker applications, or concentrated coal-water fuels made from hot water dried LRCs. There are a number of developing processes that may work with Alaskan coals. Some drying processes, however, have been plagued by the production of excessive amounts of coal fines, Since the demand for Alaskan coal is currently limited to lump size coal, large quantities of fines are a definite liability. In this study, two high temperature drying/pyrolysis processes and one hydrothermal process were investigated. The high temperature drying/pyrolysis processes were conducted at (1) the Western Research Institute, (WRI) an affiliate of the University of Wyoming Research Corporation, Laramie, WY, and (2) Coal Technology Corporation (CTC) of Brisol, VA. Hydrothermal processing was conducted at MIRL, University of Alaska Fairbanks. A summary of these processes and the products they produced follows.