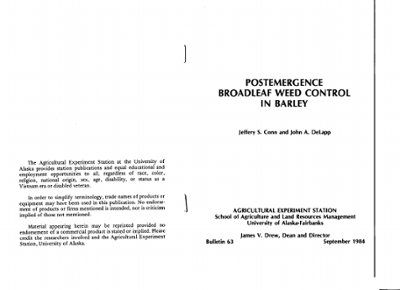 Experiments were conducted from 1981-1983 to determine the efficacy and phytotoxicity of postemergence herbicides used to control broadleaf weeds in spring-planted barley. The following herbicides were evaluated: MCPA amine (0.37, 0.75, 1.5 lb/A, active ingredient), 2,4-D amine (0.25, 0.5, 1 lb/A), bromoxynil (0.21, 0.43, 0.86 lb/A), and metribuzin (0.11, 0.21, 0.43, 0.86 lb/A). In 1982 and 1983, three additional herbicides were included: dinoseb (0.25, 0.5, 1 Ib/A), dicamba (0.09, 0.18, 0.36 lb/A), and chlorsulfuron (0.04, 0.07, 0.14 lb/A). Weed control was determined through measurements of weed biomass in each herbicide and control plot. Phytotoxicity was measured by barley yield and test weight in all years, and additionally by germination of seed produced in 1982. None of the herbicides except dicamba in 1982 significantly reduced the yield or test weights of barley below that of the control. Common lambsquarters was the only weed present in 1981 and 1982. Bromoxynil and metribuzin provided both early-and late-season control MCPA, 2,4-D, and j dinoseb took longer to control common lambsquarters but provided adequate control by midseason. Dicamba did not control common lambsquarters as well as the other herbicides. In 1983, prostrate knotweed was also present at the study site. None of the herbicides significantly reduced the number of prostrate knotweed below that of the control Germination of 'Galt' barley was not \, affected by treating parent plants with any of the herbicides tested. The following barley varieties were screened for susceptibility to metribuzin injury in 1982: Galt, Lidal, Weal, Otal, Datal, Eero, Paavo, Otra, and Klondike. Only 'Klondike' was highly sensitive to metribuzin.