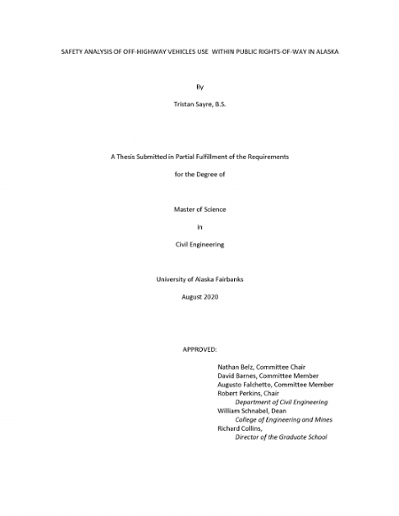 Many Alaskans own and operate off-highway vehicles (OHVs) for recreational purposes or for use as primary and secondary modes of transportation. However, the reported crash rate shows that 80 on-road crashes, resulting in five fatalities, occur each year statewide. As a result, the use of OHVs has been identified as a safety concern in the Alaska State Highway Safety Improvement Plan. Minimal research dedicated to understanding OHV use in Alaska exists which limits the potential for improvements that address safety concerns in an equitable fashion. The research presented here contributes to better understanding of on-road OHV use through observational and retrospective analysis. Field-based observations were conducted within highway rights-of-way in 14 strategic locations across Alaska to quantify OHV use and the risk-taking behaviors of riding without helmets, passengers riding without a designated seat, and riding unlawfully on the road. Additional risk factors from the field observations and Alaska Department of Motor Vehicles (DMV) crash data for the period from 2000 through 2016 were identified using the Chi-Square test for independence. Spatial analysis of the Alaska DMV crash data for the period from 2009 through 2016 tested for complete spatial randomness of crashes and identified clusters of crashes by frequency and severity using neighborhood point density statistics. Frequent OHV use was observed with daily traffic volumes exceeding 40 vehicles per day in three field study locations. Several risk-tolerant behaviors were observed including users riding without helmets and vehicles carrying passengers without a designated seat an average of 70 and 20 percent of the time, respectively. Additionally, over half the OHV users were observed to be riding unlawfully using the road. Risk-tolerant behaviors were most frequently observed in communities where on-road use is legal and happened to be coincident with the highest on-road use rates. Overrepresented risk factors for high crash severity incidents included riding at night, in summer, on unpaved roads, on local roads or collectors, in rural areas, for single-vehicle crashes with the occupant not using safety equipment and riding under the influence of alcohol. Crashes were observed to be clustered around towns with the highest frequencies occurring near town centers. The prevalence of risk-tolerant riding behaviors and unlawful on-road riding indicates the need for improvements to existing laws and the education and enforcement thereof. Changes must address the unique needs of users while also considering local jurisdiction such that safety can be improved while also maintain transport equity for residents of rural and isolated communities in Alaska.