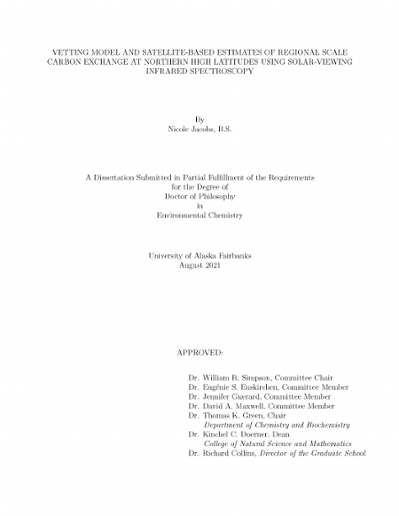 Carbon exchange in the Boreal Forest and its response to a warming climate is a critical process that needs to be understood for more accurate predictions of climate change. Therefore, we established a ground-based long-term monitoring site at the University of Alaska Fairbanks in Fairbanks, Alaska, USA (64.859°N, 147.850°W) operating a solar-viewing Bruker EM27/SUN Fourier transform infrared spectrometer (FTS). This instrument measures vertically integrated column abundances of carbon dioxide (CO₂), methane (CH₄), and carbon monoxide (CO), termed Xgas, i.e., XCO₂. These measurements are directly comparable to satellite-based measurements, for which these ground-based observations provide validation data. Measurements of XCO₂ and XCH₄ have to be extremely precise because variability in atmospheric columns of CO₂ and CH₄ is often less than 1% of the background levels of these long-lived gases. Therefore, the observations in Fairbanks were carefully vetted through comparisons of results from two retrieval algorithms applied to the same observed spectra, comparisons of observations from two EM27/SUN FTS operating side-byside, and comparisons between an EM27/SUN FTS and measurements from a Bruker IFS125HR in the Total Carbon Column Observing Network (TCCON) at Caltech, Pasadena, California. These data are all collected over a period of about 4.5 years. Comparisons of retrieval methods indicate that the results are tightly correlated, but there are offsets that could be corrected with an appropriate scaling factor. Observed biases between two colocated EM27/SUN FTS were in agreement within instrument precision. Biases between the EM27/SUN and TCCON retrievals at Caltech are larger and more variable than biases between the two EM27/SUN FTS in Fairbanks, which may be partially explained by differences in spectral resolution. These biases are also similar to those reported in previous studies. Vetted Fairbanks observations are used in combination with those from two TCCON sites in the Boreal Forest, East Trout Lake, Saskatchewan, Canada (54.354°N, 104.987°W) and Sodankylä, Finland (67.367°N, 26.631°E), to evaluate quality control methods and bias in XCO₂ from the NASA Orbiting Carbon Observatory 2 (OCO-2). This study yielded alternative quality control thresholds and bias correction, tailored to Boreal Forest regions that allow for increased data throughput and reduced seasonality in bias over northern high latitude regions. In particular, increased data throughput in spring and autumn months made it possible to measure XCO₂ seasonal cycles using satellite-based measurements. In this analysis, we found that the Asian Boreal Forest region stood out as having the largest seasonal amplitude and earliest seasonal drawdown of any region. There is also a pronounced west-to-east gradient of increasing seasonal amplitude and earlier seasonal drawdown across the Eurasian continent. Comparisons with two independent global CO₂ models are good, showing high correlation and spatial agreement. Analysis of modeled (GEOS-Chem) surface contact tracer contributions reveals that the largest seasonal amplitudes occur in regions that have the largest contributions from land-based surface contact tracers with 15 or 30 day atmospheric lifetimes, suggesting that accumulations of CO₂ exchanges during atmospheric transport on approximately monthly timescales play an important role in shaping observed XCO₂ seasonal cycles in northern high latitude regions. Furthermore, surface contact tracer contributions from land were more correlated with XCO₂ seasonal amplitude than estimates of total annual fluxes or seasonal amplitudes of flux estimates within a region, emphasizing the importance of understanding the effects of atmospheric transport when interpreting observations of XCO₂.