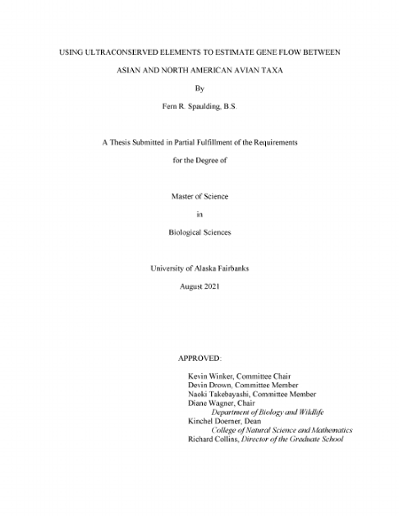 Alaska is a prime location to study avian speciation, divergence, and gene flow. The area of Beringia, the region extending from the Russian Far East across the Bering Sea though Alaska, has historically experienced periodic cycles of glaciation. These cyclic fluctuations in climate have had genetic consequences on the organisms that reside in this region. In this thesis, I examine the genetic relationships between Old World and New World lineages of Holarctic avian taxa. Specifically, I examine how intercontinental movements (i.e., gene flow) have shaped divergence, speciation, and phylogenetic relationships in several key lineages of Holarctic waterbirds. Using ultraconserved elements (UCEs) as a molecular marker, I implemented population genomic analyses to better understand divergence, speciation, and levels of gene flow among several Beringian waterbird lineages. In the first of the two studies, I examine mitogenomic and nuclear DNA in a small clade of ducks with historically uncertain relationships and species limits: the Eurasian common teal (Anas crecca crecca), the North American green-winged teal (Anas crecca carolinensis), both seasonal migrants, and the sedentary Aleutian green-winged teal (Anas crecca nimia). In addition to the three subspecies of green-winged teal, I included the South American yellow-billed teal (Anas flavirostris), a close relative of Anas crecca, to fully resolve this teal complex. Phylogenetic relationships using nuclear DNA showed the three subspecies of Holarctic greenwinged teal (Anas crecca spp.) to form a polytomous clade with A. flavirostris being sister to this clade. However, mitogenomic data show a different phylogeny, with A. c. carolinensis being sister to A. flavirostris, while A. c. crecca was sister to A. c. nimia. Evidence for divergence with gene flow was present in all three pairwise contrasts of our demographic analyses. Given prior work, gene flow was expected among the Holarctic taxa, but gene flow between North American A. c. carolinensis and South American A. flavirostris, albeit low, was not. Three geographically oriented modes of divergence are likely involved: heteropatric speciation between A. c. crecca and A. c. nimia, parapatric speciation between A. c. crecca and A. c. carolinensis, and (mostly) allopatric speciation between A. c. carolinensis and A. flavirostris. In the second study, I applied genomic methods to estimate gene flow and the magnitude of intercontinental movements occurring in vector species of avian influenza. Many seasonally migratory birds that are vectors of avian influenza (i.e., waterbirds) fly between Eurasia and North America every year, but accurate numbers of birds crossing between continents have yet to be adequately determined. Vector species' movements are difficult to quantify, but population genomics can provide baseline rates of these intercontinental movements. My study examined the following species: northern pintail (Anas acuta), mallard (Anas platyrhynchos), greater scaup (Aythya marila), common eider (Somateria mollissima), green-winged teal (Anas crecca crecca - A. c. carolinensis), long-tailed duck (Clangula hyemalis), Eurasian and American wigeons (Mareca penelope - M. americana), and common and Wilson's snipe (Gallinago gallinago - G. delicata). Many of these species are also important as subsistence food for Alaskans, increasing the risk of direct bird-to-human avian influenza exposure. In addition to providing a robust intercontinental framework of movements (i.e., gene flow) for these vector species in the natural virus transport system, I examine them in the context of the importance of each species in Alaskan diets to understand the relative risk of these taxa to human Eurasian-origin avian influenza exposure. The inferred rates of movement between these populations varies greatly among lineages. These taxon-based intercontinental movement rates and relative risk rankings should help in modeling, monitoring, and mitigating the impacts of intercontinental host and avian influenza movements.