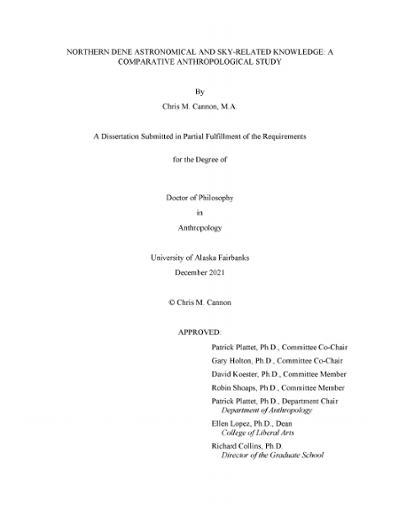 The sky and its contents are routinely overlooked in Northern Dene ethnology as a meaningful part of linguistic and cultural knowledge. However, more than 11 years of primary fieldwork learning with and from elders, speakers, and culture bearers from 12 Northern Dene groups across 32 communities in Alaska and Canada has shown that astronomical knowledge is deeply rooted in both practical and sacred ways of knowing. With a focus on detail and breadth, this comparative ethnological study utilized an experience-based approach to investigate the ways in which Northern Dene Peoples perceive, conceptualize, and integrate the sky and its contents into systems of knowledge, practices, worldview, cosmology, and spirituality. At the center of these knowledge systems is a principal constellation often identified as the incarnated spirit of a Traveler-Transformer figure who circled the world in Distant Time. Although this Traveler is widely known in Dene mythology as the one who instilled balance and order in the world, his enigmatic transformation to the sky was traditionally known by spiritually gifted people. The "Traveler" constellation is not only a world custodian and archetype of an idealized medicine person, but it is also a teacher, ally, game keeper, and the embodiment of the world. Taken together, the Traveler on earth and in the sky provides a powerful conceptual model for behaviors and actions as a central organizing principle and locus of indigenous Northern Dene worldview, cosmology, and spirituality. Two other subsequent chapters focus on general concepts of stars, minor constellations, and the use of stars in time-reckoning, weather forecasting, and wayfinding. These are followed by a chapter pertaining to the sun and moon as animate and personified beings that also embody fundamental models for proper behaviors and actions. The final chapter, prior to the conclusion, centers on socio-cosmic relationships between the Dene and a host of highly sentient atmospheric phenomena that bridge the divide between the upper cosmos and the lived world of humans. Collectively, this work underscores that the earth and sky are not exclusive of one another but are part and parcel to a unified Northern Dene cosmology and worldview that are deeply grounded in relational significances. This is among relatively few book-length studies in anthropology on the indigenous astronomical knowledge, perceptions, and practices of any extant culture in the world.