Snow as structural habitat for wolverines in a changing Arctic 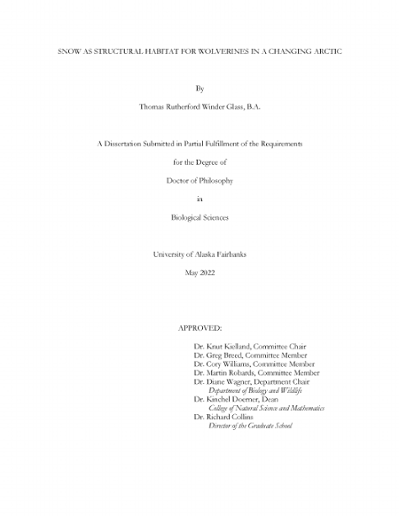 Arctic snowpack provides critical wintertime habitat for animals to facilitate thermoregulation and avoid predators. Wolverines (Gulo gulo) are iconic among such animals, relying on snow burrows for resting sites and reproductive dens. Most of the knowledge regarding this mesocarnivore's association with snow, however, has so far originated in more southerly latitudes. In this dissertation, I investigated Arctic wolverines' behaviors associated with snow, focusing on how specific snow properties influence resting, habitat selection, and avoiding predators. Motivated by the paucity of published descriptions of wolverine resting burrows and reproductive dens on tundra, I first described terrain features and architecture of such sites. I found that resting burrows typically consist of a single tunnel leading to a resting chamber, sometimes associated with non-snow structure such as stream cutbanks and river shelf ice. By contrast, reproductive dens typically consist of longer tunnels associated with snowdrift-forming terrain. Second, I used GPS collar data from 21 adult wolverines, coupled with snowpack information at 10 meter pixel resolution, to evaluate wolverine habitat selection and movement response to snow depth, density, and melt status. I found that wolverines select deeper, denser snow, except when snow is melting, likely reflecting resting site use. Third, I developed a machine learning model to classify wolverine behaviors using tri-axial accelerometers based on direct observations of three captive wolverines, and applied this model to free-living wolverines in Arctic Alaska. I found that the model performs better when allowed to predict behaviors as "unknown," and that it accurately predicts resting, food handling, running, and scanning surroundings. Finally, based in part on this classification model, I evaluated the extent to which wolverines' use of snow burrows and surface beds for resting sites is influenced by thermoregulatory needs versus predation avoidance. I found evidence in support of both demands driving resting behavior; wolverines trade thermoregulation off against predation avoidance by resting on the snow surface on warm, sunny days, but use snow burrows on cold, dark days to meet both demands simultaneously. Collectively, this dissertation demonstrates the importance of Arctic snowpack to wolverines, a topic of increasing importance as the snow season shortens with climate change, and serves as a model for investigating behavioral processes associated with snow among other species.