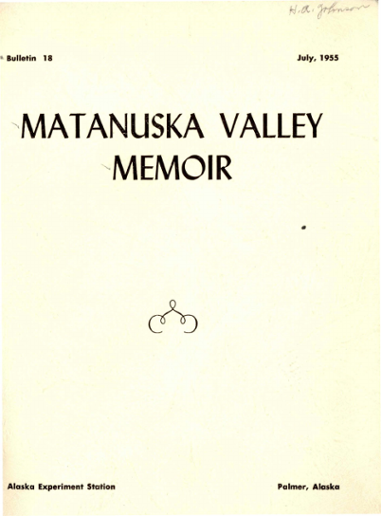 The Matanuska Valley was created through action of ice, water and wind. When the last glaciers retreated up the Susitna, the Knik and the Matanuska valleys, vegetation began cove ring the scars, Over several centuries a dense growth of trees and brush screened the land from Knik Arm to the mountain slopes of the Talkeetna range . Here and there a lake broke the uniform forest mantle. A salt marsh at the mouth of the Matanuska River kept the rank undergrowth from reaching tide water, A few low spots near the Little Susitna and other swampy areas supported a thick cover of moss or grass. The Valley, which really isn't a valley at all but a reworked foreland, rises from the Matanuska River in a series of benches ranging in width from a few hundred feet to more than a mile. Some areas are flat, others are rolling. Soil depth varies from eight feet in thickness for the region bordering the Matanuska River to a few inches in sections west of Wasilla. The soil mantle, of windblown loessial materials, is of relatively new geologic development, The Valley is bounded by the Chugach Mountains on the east, the Talkeetnas on the north, the Susitna Valley on the west and Knik Arm on the south. Winters are long but usually not unduly severe; summers cool and relatively moist, To this country came trappers, prospectors and traders in closing years of the nineteenth century. Hordes of insects, difficult trails, sparse population and great distance s from supply points discouraged many potential residents, Those who stayed were interested primarily in the Willow Creek gold field or the Matanuska coal deposits. Another generation, an uneasy international situation and social crises within the United States were required before the Matanuska Valley and the rest of Upper Cook Inlet were ripe for use. This history of the Valley is designed to trace the many human elements affecting the ebb and flow of agricultural development here. It brings into focus many problems that must be solved before new areas in Alaska can be settled satisfactorily.

We acknowledge indebtedness to the historians and developers of Alaskana who preceded us and provided much of the information we have compiled into our account of the birth of a community. Many "old timers" from the Valley provided valuable insight into situations they had experienced. Mr. Roland Snodgrass, Mrs, June Murphy and Miss Dolores Pommier assisted in compilation and preparation of background data. Mr. James Hurley made available to us the ARRC unpublished files for compilation of certain data. Various public officials aided us in many ways as we worked· our way through recorded . history. Several old photos were contributed by Mr. Walter Teeland of Wasilla and Mr. Don L. Irwin of Palmer. Several persons in public and private life who know Alaskan conditions have reviewed the manuscript and suggested improvements, Special acknowledgement is due Don L. Irwin, Director of the Alaska Agricultural Experiment Station, His vision and foresight were largely responsible for the undertaking, His encouragement and advice bolstered our lagging spirits before the long task was completed. He has read each chapter critically and has assisted particularly with interpretation of materials since 1935,