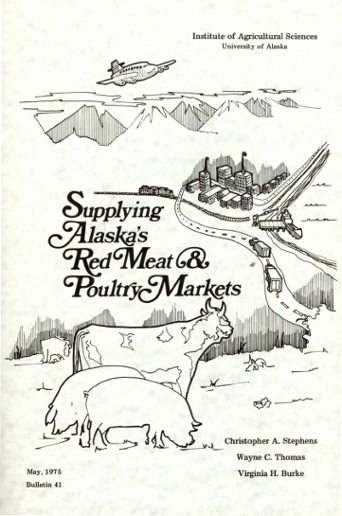 Analysis of the red meat and poultry market will be presented on a regional basis. Alaska was divided into three geographic regions: Southcentral, Southeast, and Bush (Figure 1). These regions differed in population, modes of transportation available, and market structure. Southcentral Alaska includes the Kenai Peninsula, Big Delta, Glennallen, Valdez, Cordova, and Chitina, as well as all areas serviced directly by the Alaska Railroad, i.e., Whittier, Anchorage, and Fairbanks.3 It contained 224,000 people in 1972, which was 69 percent of Alaska's population [2]. Most of the meat and other goods shipped into the region came by water transportation through Seattle. The area had the only completely differentiated retail, wholesale and military market sectors in the state. The Southeast region extends from Icy Bay in the north to Ketchikan in the south. This region was third in population size in 1972 with an estimated population of 45,000, 14 percent of the state total. It received most of its meat from Seattle via water. Retail and the hotel, restaurant and institution trade made up almost all of the red meat market. A differentiated wholesale sector was not apparent. The Bush includes all other areas of the state. It also received meat and other goods by air and water, mainly transshipped through Anchorage. No highway or rail transportation was available to this region. The 1972 population, 17 percent of the state total, was approximately 55,000. Twenty-nine percent of this was concentrated on Kodiak Island and the Aleutian Islands. The retail, wholesale and military sectors are primarily extensions of wholesale and military markets of Southcentral Alaska.

The authors thank K. Casavant, Washington State University and W. Burton, A. Brundage and C. Logsdon, University of Alaska, for reviewing the manuscript. Numerous people in Alaska and Washington provided information without which this research could not have been completed. We would like to single out G. Hart and R. See, Alaska Division of Agriculture; D. Carney, Alaska Department of Economic Development; C. Marsh, Agricultural Research Service, U.S.D.A.; J. Melton, Alaska Crop and Livestock Reporting Service; David Petty, Anchorage Cold Storage, Inc.; E. Blood, Carrs Food Center, Inc.; D. Hearn, Foss Alaska Lines, Inc.; L. Lindsay, Alaska Fish and Farm, Inc. K. Zito also deserves thanks for typing the numerous drafts of the manuscript. Thanks is due the Department of Business Administration, University of Alaska, Fairbanks, for their cooperation in this research.