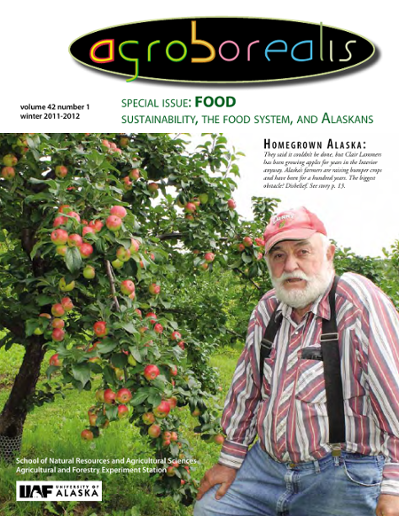 [Geography] -- The Alaska Food Policy Council: Everyone knows that food is important, but our dependence upon Outside for the stuff of life has finally begun to seem, well, just a little discomfiting to Alaska's policymakers. Once again, Alaskans are searching for a way to feed themselves. / Deirdre Helfferich -- Supermarkets in Fairbanks: Food must be affordable as well as accessible for a community to achieve food security. How well does Fairbanks, Alaska's second-largest city, stack up in this regard? / Alison Meadow -- [High-Latitude Agriculture] -- Homegrown Alaska: Farmer Profiles Open the Eyes of the Interior to the Scope of Local Agriculture: The scope of food grown by Interior farmers is staggering, and the breadth and variety of the farmers' characters is equally impressive. From Bethel to North Pole to Manley Hot Springs, there's more growing here than most people realize. / Nancy Tarnai -- Assessing Food security in Fairbanks, Alaska: There's a lot of farmers in the Interior, but finding out what they grow, what they need, and where they sell their agricultural products can by tricky. This senior thesis project answers several questions about agriculture in the Tanana Valley and points the way to determining how best to improve food security in the Fairbanks area. /Charles Caster -- Recovering from an aberration: The Future of Alaska's Livestock: Livestock is an integral part of agriculture, and this is true in Alaska as anywhere else: animals are raised for meat, milk, fiber, transportation, labor, and companionship. Or is there a difference in the Last Frontier? / Deirdre Helfferich -- Greenhouse: a place to grow: When the forty-year-old Agricultural and Forestry Experiment Station greenhouse on the West Ridge of the UAF campus was dismantled, it was only a matter of months before a brand-new teaching and research greenhouse was constructed. / Nancy Tarnai and Deirdre Helfferich -- ARS shuts the door on Alaska research: Agriculture Secretary Thomas Vilsack approved the closure of twelve Agricultural Research Service stations, including the ARS in Alaska, and despite a plea from US Senator Mark Begich. When the Sub-Arctic Research Unit and its gene bank close, the door will shut on a long history of research that won't be easily picked up by anyone else. / Nancy Tarnai -- [Events, People, & Places] Food -- Food Day begins with a bang: The first national Food Day celebration was inaugurated in 2011, and UAF was right there with an Iron Chef Surf vs. Turf Cookoff Challenge, Food Jeopardy, films, displays, and a delicious free all-local buffet. / Nancy Tarnai -- Buzz Klebesadel: An Alaskan author, scientist, and agricultural leader has passed on. -- [Natural Resources] -- Fisheries and food security in Alaska: Any discussion of food security in Alaska is incomplete without at least some attention to the current and potential role of fisheries. For thousands of years, coastal and living marine resources have provided a keystone for the cultural, economic, and environmental health and wellbeing of Alaska's people and communities. / Philip A. Loring and Hannah L. Harrison -- Seed libraries: Seed-Sharing on a Community Level: While many people are familiar with the concept of a seed bank, not so many are acquainted with the idea of a seed library. Now this new kind of lending institution has come to Alaska. / Deirdre Helfferich -- A guide to bumblebees of the Interior: A Taxonomic Key and Notes on BOMBUS Species: Bumblebees are important pollinators, and can even be more efficient than honeybees at crop pollination. Their tongues are longer, they can buzz pollinate, and there are lots of them in Alaska. With the recent die-offs of honeybees due to Colony Collapse Disorder, scientists are looking at native bees and other pollinators. / Rehanon Pampell, Alberto Pantoga, Derek S. Sikes, Patricia Holloway, and Charles Knight.