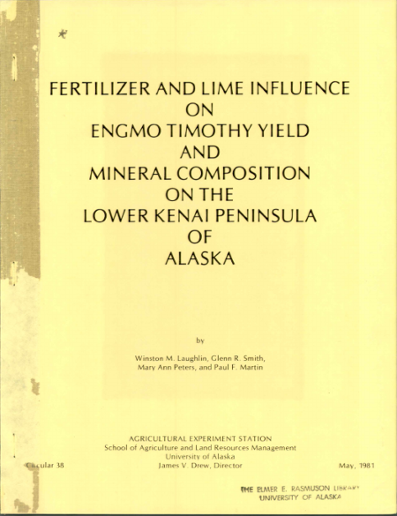 Another forage to supplement the native bluejoint (Calamagrostis canadensis) in the Caribou Hills area on Alaska’s lower Kenai Peninsula is needed. Domestic grass growth has seldom been successful, although timothy (Phleum pratense) is more tolerant of the acid conditions found in this area than are many other grasses suited for use in Alaska. This report summarizes the results of three separate experiments evaluating the effects of lime and fertilizers on forage production and chemical composition of Engmo timothy on Kachemak silt loam (Typic Cryandept). A 3-year study showed that lime markedly improved growth and yield of tim othy in an area where domestic grasses had seldom survived. Ammonium phosphate nitrate, calcium metaphosphate, and treblesuperphosphate were equally effective as a source of phosphorus (P). In an adjacent 6-year study, each lime increment over 1 ton per acre increased the soil pH, forage yield, and nitrogen (N) uptake, and tended to reduce the crude-protein concentration in forage. Increasing N applications increased yields, crude-protein percentage, and N uptake. Native bluejoint gradually replaced the timothy on plots receiving less than 2 tons lime per acre, responded to the high N rate, and thrived with two cuttings per growing season. In a 5 -year study, oven-dry yields of both cuttings increased with N rates up to 120 lb N per acre with no further increase at 180 lb N per acre. Each increasing N rate each year increased the crude protein and nitrate (N 0 3 -N) concentrations of both cuttings. Nitrogen rates exceeding 60 lb N per acre increased the mean seasonal P uptake and tended to increase the P concentration. Mean seasonal potassium (K) uptake varied with N rate as follows: 120>180 and 240> 60 lb N per acre. Each increasing N increment through 180 lb N per acre increased the mean seasonal calcium (Ca) and magnesium (Mg) uptake. Increasing P rates from 75 to 150 lb per acre had no effect on forage yield. Increasing the P rate from 75 to 150 lb per acre increased the P concentration of both cuttings and the mean seasonal P and sulfur (S) uptake and depressed the mean seasonal Ca and Mg uptake. Increasing the K rate from 83 to 166 lb per acre increased the K concentration and depressed the crude-protein concentration of both cuttings as well as increasing the mean seasonal K and total N uptake. The higher K rate increased oven-dry yields of both cuttings and the mean seasonal N 0 3 -N uptake at the higher N rates. The soil became more acid from 1972 to 1976 with September pH values generally lower than those of the preceding June, particularly in the top 2 inches. The highest N application (240 lb/A) produced the greatest pH reduction. The N 0 3 -N in the soil increased with each increasing N rate. Available P increased over time, accumulated in the top 2 inches, and was greater with the heavier P application. Available K also accumulated in the top 2 inches, was greater in September than in June, and was greater where 166 lb K per acre had been used than with 83 lb. These experiments demonstrated that Engmo timothy can be grown successfully on the more acid Kachemak silt loam with lime application and proper fertilization.

This report contains the results of a cooperative investigation between Agricultural Reseach, Science and Education Administration, United States Department of Agriculture, and the Palmer Research Center, Agricultural Experiment Station, University of Alaska.