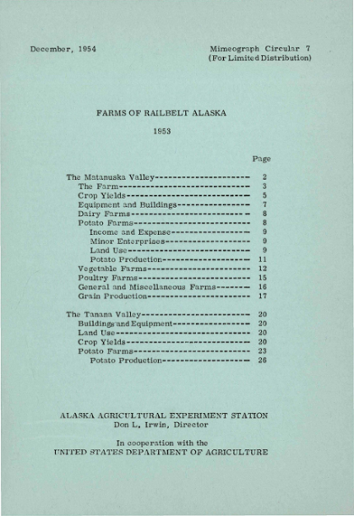 Gross farm income to Alaskans was nearly 3 million dollars in 1953. Milk was the most important farm product, followed by sales of potatoes, poultry and vegetables, The Matanuska Valley provided over half of the total farm production, Seventy-six farmers were interviewed in 1953, Of these, 39 were dairy farmers , 23 were potato farmers , 5 were poultry farmers, 4 were vegetables farmers and 5 were miscellaneous farmers. Dairymen as a whole increased their cow numbers faster than they cleared land in preparation for larger herds. Potato farmers experienced a very poor year. Yields were high and acreage planted was greater than ever before, but disease cut the crop drastically and the market was very competitive, This was the first year in the past 5 that potato growers as a group lost money. Poultry producers obtained a greater average rate of lay per hen than in previous years, Even so, the margin of return was small. The Tanana Valley was the second most important agricultural area in 1C)53. Potatoes were the leading enterprise. There was much interest in dairy farming but lack of capital, buildings and a dependable water supply are major deterrents to development of this enterprise, On many potential dairy farms, cleared land was no longer a limiting factor because over one-third of the cropland was either idle or in green manure crops. Tanana Valley potato growers who received the greatest net farm returns from their farm operations obtained high yields, had a high percentage of US #1 potatoes, had a sizeable acreage in crops and utilized considerable family labor. The other leading agricultural areas -the Kenai Peninsula, Southeastern Alaska and the Aleutian Chain-were the source of over 20 percent of the total agricultural production in Alaska during 1953. Several types of farm enterprises prevailed in these areas and on varying scales of production. Dairy and poultry were the leading enterprises in Southeastern Alaska, poultry and beef on the Kenai Peninsula and beef and sheep on the Aleutian Chain. No one enterprise existed on sufficient numbers of farms to make analysis possible when information was collected by the survey method.