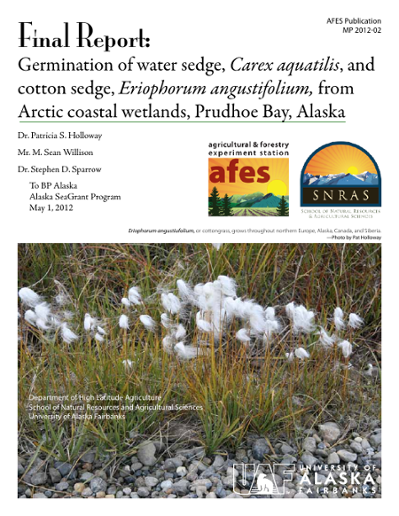 The Prudhoe Bay oil fields, Alaska were discovered in 1968, and commercial production commenced in 1977 with the completion of the Trans-Alaska Pipeline. Oil production has been declining since 1989, although additional exploratory drilling continues. Support facilities for oil production are built on permafrost soils that surface-thaw in summer to form extensive wetlands composed of moist meadows, sedge marshes, moist sedge-dwarf shrub tundra, grass marshes, small ponds and lakes (Walker and Acevedo 1987). To prevent thawing and subsidence of subsurface, ice-rich soils, gravel pads, 2m (6 ft) or more thickness have been built to support drilling sites as well as roads, airstrips and building pads (Kidd et al. 2006). As well sites are decommissioned, the gravel is wholly or partially removed resulting in the need for site rehabilitation and/or restoration to support wetland plants and, in some instances, enhance wildlife habitat (McKendrick 1991, Jorgenson and Joyce 1994, Kidd et al. 2004, 2006). Since the 1970s, methods to revegetate arctic wetlands have included a variety of planting techniques, seed treatments, seeding with native and non-native species (mostly grasses), and fertilizer applications (Chapin and Chapin 1980; Bishop and Chapin 1989, Jorgenson 1988, Kidd and Rossow 1998, Kidd et al. 2004, 2006, Maslen and Kershaw 1989, McKendrick 1987, 1991, 2000, McKendrick et al. 1980, McKendrick and Mitchell 1978, Mitchell et al. 1974). Treatments also have included sprigging and plug transplantation (Kidd et al. 2004, 2006), surface manipulation (Streever et al. 2003), as well as natural re-colonization (Ebersole 1987, Schwarzenbach 1996). These methods have been partially successful. The gravelly soils often are dry, nutrient-poor, and have a higher pH and lower organic matter content than surrounding soils, so natural recolonization does not occur readily (Bishop and Chapin 1989, Jorgenson and Joyce 1994). Methods such as sprigging and plug transplanting are slow, labor intensive and expensive compared to direct seeding. Fertilization, especially with phosphorus, is recommended for long-term survival of plants grown on gravelly sandy soils (BP Exploration and McKendrick 2004). Two common species in the arctic coastal wetlands are water sedge, Carex aquatilis Wahlenb. and cotton sedge, Eriophorum angustifolium Honck. Carex aquatilis in particular forms large populations that spread vegetatively by rhizomes and often dominate these wetland environments (Shaver and Billings 1975). Despite their abundance, these species have not been considered for revegetation because of poor seed germination and inadequate information on seed development and viability (Dr. William Streever, BP Alaska, pers. comm.). Both Carex and Eriophorum in arctic environments produce abundant seeds, but seed viability and germination often is low and highly variable among years and locations (Archibold 1984, Billings and Mooney 1968, Ebersole 1989, Gartner et al. 1983). Germination recommendations for both species vary by location and have included an array of pretreatments such as light, alternating temperatures, cold stratification, scarification, and high and low temperature dry storage (Amen 1966, Billings and Mooney 1960, Bliss 1958, Hunt and Moore 2003, Johnson et al. 1965, Phillips 1954 and Steinfeld 2001). The purpose of this project was to explore methods of seed germination of Carex aquatilis and Eriophorum angustifolium, to learn the conditions for germination and dormancy control mechanisms, and identify seed treatments that might enhance germination for eventual use in direct-seeding or plug production for arctic wetland revegetation.