A study on the morphology of magnetic storms 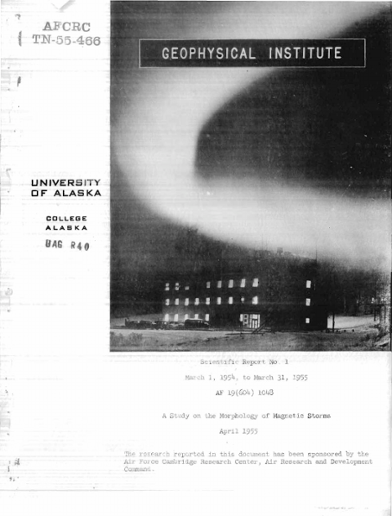 The morphology of magnetic storms that has been investigated by S. Chapman since 1918 was further extended with more material as regards both the number of storms and the number of observatories, Three hundred and forty-six magnetic storms having sudden commencements were selected for the years 1902 to 19^5- These 3^6 storms were classified by a new method based on the most notable characteristic of the stormtime variation observed in low and middle latitudes, namely, a worldwide diminution in the horizontal force; hence the maximum diminution in the horizontal force averaged over these latitudes was used as a measure to indicate the intensity of magnetic storms. The 3^6 storms here selected were classified into three intensity groups: (l.) weak, (2) active, and {3 ) great storms.. The numbers of storms classed in these categories are 136, 136 and kj, respectively. In the present thesis the investigation on the 136 weak magnetic storms is described. (in the previous study made by Chapman forty storms of moderate intensity were used.) The number of magnetic observatories used in, the present study was also widely extended from eleven (in the previous work) to twentyfive. Seven observatories in the southern hemisphere distributed between geomagnetic latitudes 12° and 48° were included in these twentyfive observatories„ The geomagnetic latitudes of the eighteen northern observatories range from 20° to 80°, Several improvements were also made in the treatment of the magnetic data. One of the improvements is that hour-to-hour differences derived from the hourly values of the three magnetic elements, the horizontal force, declination and the vertical, force, were used, instead of the ordinary hourly values as given in observatory reports. With the 136 weak magnetic storms the storm-time variations of the three elements for the four pre-storm hours and the first seventy-two hours from the storm commencement were determined for eight groups of observatories, whose mean geomagnetic latitudes are 28° S, 21°, 28°, k2°, 52°, 59°, 65° and 80°; the first group being in the southern, the rest in the northern hemisphere. Thus the average features of the storm-time variations at various latitudes were able to be studied more closely. In determining these storm-time changes the daily variations on quiet days uncorrected for the non-cyclic variation were removed from the original data in order to allow for this latter variation. Then the disturbance local-time inequality for the first, second and third storm days was examined for each magnetic element for each of the groups of observatories. The vectograms of these variations were also drawn. Besides confirming, on the whole, the views expressed in Chapman's discussions on the storm-time as well as the disturbance local-time inequality, the present results revealed more detailed features of these variations at various latitudes. The disturbance local-time inequality for each element for each group of observatories was further studied for shorter intervals of storm-time, that is, for four 6-hour intervals in each of the first and second days and for three 8-hour intervals in the third storm day. The results were harmonically analyzed to determine the diurnal (2^-hour) and the semi-diurnal (12-hour) components of these variations. The diurnal component was illustrated by harmonic, dials, by which means the decay of the amplitude of these variations and the change of their phases with storm-time were clearly demonstrated. It was found that the phases of the disturbance diurnal equality in declination and the vertical force have certain definite relations with that in the horizontal force at each latitude, and that if the results for declination and the vertical force are combined -with those for the horizontal force with some appropriate modifications in their amplitudes and phases, and if such averages are further combined among the groups of observatories in low and middle latitudes, the averaged harmonic dial so obtained is much more regular than those for individual elements or for smaller groups. The rates of growth and decay of the storm-time change and the disturbance local-time inequality were compared., The results indicate that these two variations vary at rates that are materially different in their course. Detailed descriptions and discussions on these results, the final objects of the present study and plans for its future extension, are given in the present thesis.

Geophysical Institute at the University of Alaska