Investigation and Prosecution of Sexual Assault, Domestic Violence, and Stalking 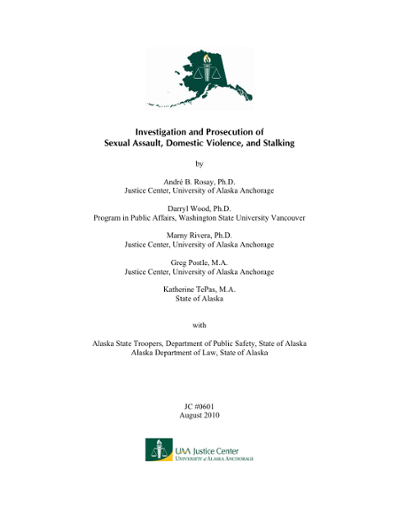 This project examined sexual assault, domestic violence, and stalking cases reported to the Alaska State Troopers. More specifically, we examined all sexual assault and sexual abuse of minor incidents reported to Alaska State Troopers in 2003 and 2004, all assaults in domestic violence incidents reported to Alaska State Troopers in 2004, and all stalking incidents reported to Alaska State Troopers from 1994 to 2005. In addition, we examined whether cases were referred to the Alaska Department of Law for prosecution, were accepted for prosecution, and resulted in a conviction. This report provides a thorough overview of key characteristics on reports, suspects, victims, incidents, witnesses, and legal resolutions. This report also examines the predictors of legal resolutions. Finally, this report examines whether rural cases are less likely to have successful legal resolutions. Results clearly show that what Alaska State Troopers do when investigating reported offenses can increase rates of referral, acceptance, and conviction. In addition, we found no evidence of under-enforcement in rural areas. Contrary to allegations that the provision of criminal justice services is diminished in rural areas, we found that geographic isolation does not hinder case processing. These results are important for other rural jurisdictions. Most importantly, we found that cases first reported to local first responders had better legal resolutions. This finding suggests that the resources provided by these first responders (i.e., reduced response time and enhanced investigation) increase the rates of prosecutions and convictions. This finding is important not just in Alaska, but in other jurisdictions where official responders are not immediately available.