Benefits of the Southcentral Rail Extension to the Municipality of Anchorage 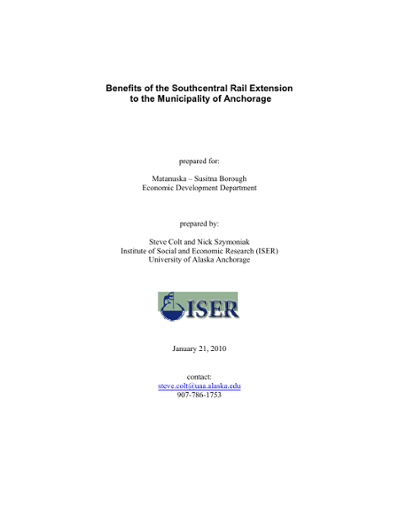 The proposed Southcentral rail extension to Port MacKenzie is likely to generate significant economic benefits for the residents of Anchorage. These benefits are due to a combination of reduced transport costs, the ability to ship bulk commodities over shorter distances, and economical access to industrial land. We considered and analyzed these benefits under a set of assumptions about job creation, transportation costs, land use considerations and future mineral development. Our major findings include the following: Jobs • Port MacKenzie. The rail extension will generate new jobs for Anchorage workers by stimulating industrial development and jobs at Port MacKenzie. Under a base case scenario with a rail extension and ferry service, Anchorage residents would gain 730 average annual jobs and $50 million of annual income during the period of 2013 -2017 from industrial development at Port MacKenzie. Hundreds more jobs would be gained after 2017. The rail extension will play an important role in this process. For example, it will allow coal exports through the port as early as 2013, generating more than 100 jobs. • New Mines. Major new mines shipping concentrate via the rail extension would generate thousands of new jobs, and a significant fraction of these jobs would be held by Anchorage residents. Our detailed analysis of the potential employment from five specific mining projects indicates that more than 2,000 average annual jobs would be created in Anchorage or held by Anchorage residents once the mines are fully developed. Most of these jobs would be in mining and in professional sectors that pay good wages. Also, during initial mine development, many of the jobs would be in construction and fabrication. • Rail Construction. The construction of the rail extension would generate up to 3,000 total jobs, and ongoing operations would generate up to 150 total jobs. It is likely that many of these jobs would be held by Anchorage residents. • State Revenues. State mining taxes generated from new mines will boost the Anchorage economy. Estimated tax revenues and royalties would grow steadily, reaching $267 million per year by 2040. A large share of these potential tax revenues, roughly proportional to Anchorage’s share of state population, would likely flow into the Anchorage economy, sustaining hundreds of direct jobs and reducing property tax burdens that would otherwise stifle private sector job creation. Regional Competitiveness • New Economic Opportunities. Port MacKenzie and the rail extension, operating together, are a significant new strategic asset for the entire regional economy. This infrastructure will create expanded opportunities for mineral, timber, and energy resource development, and the export of bulk commodities by rail through Port MacKenzie constitutes a new economic sector for the Southcentral regional economy. As the region’s commercial and financial hub, Anchorage will gain jobs and income from all of this activity. • More Efficient Land Use. The rail extension allows for higher-valued use of land in Anchorage. The rail extension will allow for railroad-dependent industrial development to take place at Port MacKenzie. This development would allow limited existing industrialzoned land throughout Anchorage to be used for other, higher-value uses such as commercial development, while still meeting the regional economy’s need for industrial land. Fiscal Benefits • New State Revenues. As noted above, revenues to the State of Alaska from new resource development would grow steadily, reaching $267 million per year by 2040. These revenues will reduce the need for other taxes, stimulating capital formation and job creation by the private sector. • Higher Local Tax Base. Local governments will also see higher tax revenues from a higher-valued property tax base. The stimulated new development will increase the tax base and reduce the need to raise taxes on homeowners or existing businesses. Other Benefits • Port of Anchorage. The industrial and mineral development stimulated by the rail extension to Port MacKenzie will likely increase both the volume and the value of cargo going through the Port of Anchorage. For example, if large mines are developed, the goods and equipment used by the mines for development and operations will flow through Anchorage. • Rail Shipping Costs. The unit cost of shipping on the Alaska Railroad is likely to fall as fixed costs of roadbed maintenance and administration are spread over a higher volume of shipments.