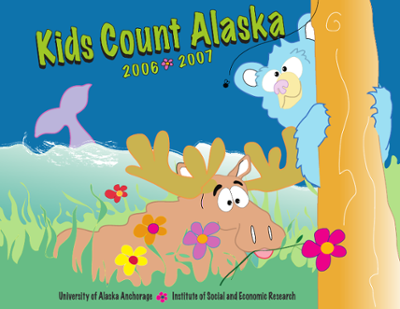 About This Year’s Book Every year the Kids Count Alaska data book reports on how the children of Alaska are doing. But we also like to tell readers a bit more about life in Alaska, to help them understand the place Alaska’s children call home. This year, we’re celebrating the wildlife that is so much a part of life in Alaska. Alaskans watch, hunt, photograph, and coexist with hundreds of large and small species of animals and birds. That coexistence is not always easy for either the wildlife or the people, but it is always interesting. An increasing number of tourists are also being drawn to Alaska for the opportunity to see wildlife that is either scarce or non-existent in other areas of the United States and the world. The whimsical wildlife illustrations on the cover and at the start of each indicator section are the work of Sebastian Amaya Garber, a talented young artist who grew up in Alaska but is now working toward a degree in industrial design at Western Washington University in Bellingham, Washington. The flip side of each illustration describes something about the specific animals and birds we’re profiling, which are: The sea otter, whose rich fur brought the Russians to Alaska • in the century before the United States bought Alaska The brown bear, one of the most respected and feared land • animals in North America The raven, which plays a big role in Alaska Native culture and • is one of the smartest, toughest birds anywhere The puffin, whose large, yellow-orange bill and orange feet • make it a stand-out in Alaska’s coastal waters The moose, which can weigh up to 1,500 pounds and is • often seen wandering neighborhoods and crossing streets in Alaska’s largest urban areas The humpback whale, whose dramatic breaches make it a • favorite of Alaskans and visitors along the southern coast of Alaska in the summertime Whahat is Kids Count Alaska? Kids Count Alaska is part of a nationwide program, sponsored by the Annie E. Casey Foundation, to collect and publicize information about children’s health, safety, and economic status. We pull together information from many sources and present it all in one place. We hope this book gives Alaskans a broad picture of how the state’s children are doing and provides parents, policymakers, and others interested in the welfare of children with information they need to improve life for children and families. Our goals are: Broadly distributing information about the status of Alaska’s • children Creating an informed public, motivated to help children• Comparing the status of children in Alaska with children • nationwide, and presenting additional Alaska indicators (including regional breakdowns) when possible Who Are Alaska’s Children? More than 206,000 children ages 18 or younger live in Alaska—just under a third of Alaska’s 2006 population of about 671,000. That’s an increase of about 15% in the number of children since 1990. During the past 15 years the age structure of Alaska children has also changed, with younger children making up a declining share and teenagers a growing share. In 1990, children ages 4 or younger made up 31% of all children; by 2006 that share had dropped to 26%. Among those 15 to 18, the 1990 share was about 16%, but it had risen to 22% by 2006. Boys outnumber girls in Alaska by close to 6%. There are more boys than girls in every age group. Even among infants, boys outnumbered girls by 8% in 2006. Alaska’s children have also grown more racially diverse in the past two decades, as illustrated by the figure showing Alaska’s school children by race. In 1988, 68% of school children were White and 32% were from minorities—primarily Alaska Natives.