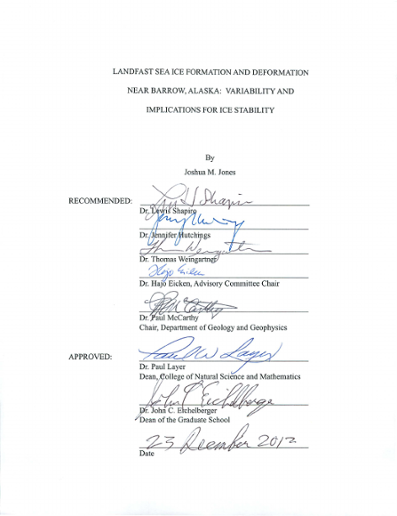 Climate change in the Arctic is having large and far-reaching effects. Sea ice is declining in annual extent and thinning with a warming of the atmosphere and the ocean. As a result, sea ice dynamic behaviour and processes are undergoing major changes, interacting with socio-economic changes underway in the Arctic. Near Barrow, Alaska, landfast sea ice is an integral part of native lñupiaq culture and impacts the natural resource extraction and maritime industries. Events known as breakouts of the landfast ice, in which stable landfast ice becomes mobile and detaches from the coast, have been occurring more frequently in recent years in northern Alaska. The current study investigates processes contributing to breakout events near Barrow, and environmental conditions related to the detachment of landfast sea ice from the coast. In this study, synoptic scale sea level pressure patterns are classified in an attempt to identify atmospheric preconditioning and drivers of breakout events. An unsupervised classification approach, so called Self-Organizing Maps, is employed to sort daily sea level pressure distributions across the study area into commonly observed patterns. The results did not point to any particular distributions which favored the occurrence of breakouts. Because of the comparatively small number of breakout events tracked at Barrow to date (nine events between 2006 and 2010), continued data collection may still yield data that support a relationship between breakout events and large scale sea level pressure distributions. Two case studies for breakout events in the 2008/09 and 2009/10 ice seasons help identify contributing and controlling factors for shorefast ice fragmentation and detachment. Observational data, primarily from components of the Barrow Sea Ice Observatory, are used to quantify stresses acting upon the landfast ice. The stability of the landfast ice cover is estimated through the calculation of the extent of grounded pressure ridges, which are stabilizing features of landfast ice. Using idealized ridge geometries and convergence derived from velocity fields obtained by coastal radar, effective grounding depths can be calculated. Processes acting to destabilize or precondition the ice cover are also observed. For a medium-severity breakout that occurred on March 24, 2010, the calculated atmospheric and oceanic stresses on the landfast ice overcame the estimated grounding strength of ridge keels, although interaction with rapidly moving pack ice cannot be ruled out as the primary breakout cause. For another medium-severity breakout that took place on February 27, 2009, the landfast ice was preconditioned by reducing the draft of grounded ridge keels, with subsequent detachment from the shore during the next period of oceanic and atmospheric conditions favoring a breakout. For both of these breakouts, in addition to their potential role in destabilizing the landfast ice by overcoming the ridge grounding strength, current and/or wind forcing on the landfast ice were found to be important factors in moving the stationary ice away from shore.