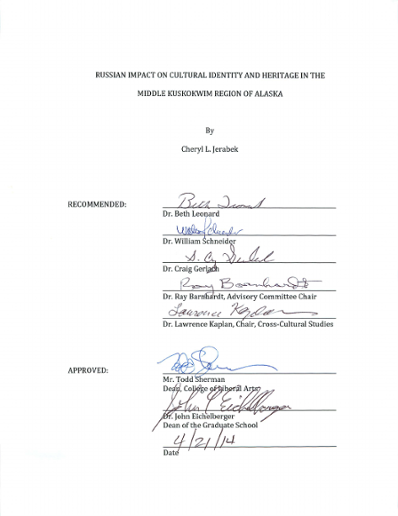 The objective of my research is to document the role that Russian heritage has played in the individual and group identity of Native people in the middle Kuskokwim River region of Alaska. For purposes of this study this area includes the villages of Lower Kalskag, Upper Kalskag, Aniak, Chuathbaluk, Napaimute, Crooked Creek, Red Devil, Georgetown, Sleetmute, and Stony River. The changes and adaptations that occurred in the middle Kuskokwim River area during the Russian era 1790-1867, the changes that occurred with the sale of Alaska to the United States, and the continued changes up to the present time, including the Alaska Native Claims Settlement Act (ANCSA), all impact the heritage and traditions of today. Today the middle Kuskokwim River region of Alaska includes Yup'ik, several Athabascan groups, Russian, and other European cultures. In the late 18th and early 19th centuries, Russian exploration, trading activities, and the Russian Orthodox Church changed the daily life of the indigenous population and added to the cultural blending of the region. That blending is evident even today, as Russian heritage has become part of the current Alaska Native cultural identity in the middle Kuskokwim. My study asks the following research questions: What impact did Russian explorers, traders, and Orthodox clergy have on the middle Kuskokwim River region of Alaska? How has Russian influence changed over time, and how has this Russian heritage impacted present-day cultural identity in the middle Kuskokwim region? Included is the broader discussion of how people in the region define their identity and what aspects of that identity are most important to them. Since I am using an ethnohistorical approach, I felt it was important to include an historical summary of the cultural change and indigenous adaptation during the Russian era and the changes brought about by the sale of Alaska, leading into more modern-day impacts. I interviewed 24 community members, focusing on their indigenous and Russian heritage. Interviews with two nonindigenous scholars also provided additional information on the indigenous and Russian history and culture of the region. From the semistructured interview dialogues, key themes and resonant narratives were identified. Those who were interviewed expressed indigenous values as the core of their identity including respect for elders and others, knowledge of family tree, respect for land and nature, practice of Native traditions, honoring ancestors, humility, spirituality, and importance of place. This helped me formulate an indigenous identity framework to illustrate the very complex pieces that influence identity in the middle Kuskokwim River region of Alaska. In the end, Russian heritage has been absorbed into the local culture, especially in the area of religion, and has been indigenized into a deeply rooted sense of place and ways of being and expressing Native culture. It is this indigenous rootedness that is at the core of identity in the middle Kuskokwim.