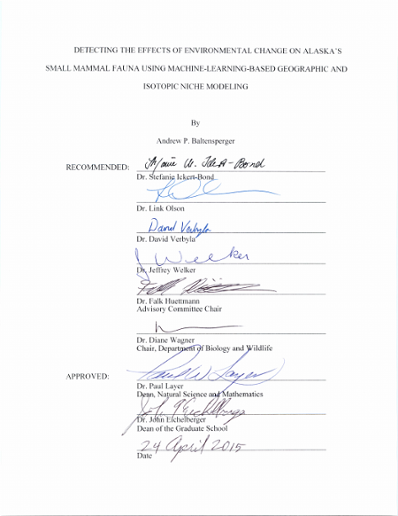 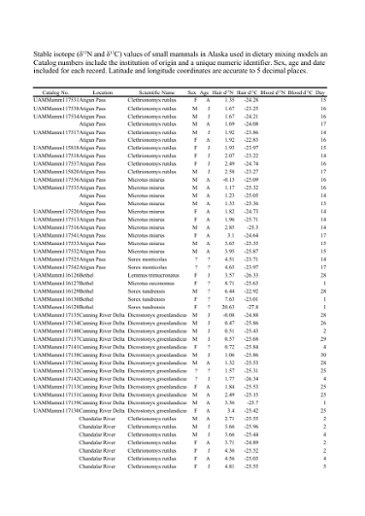 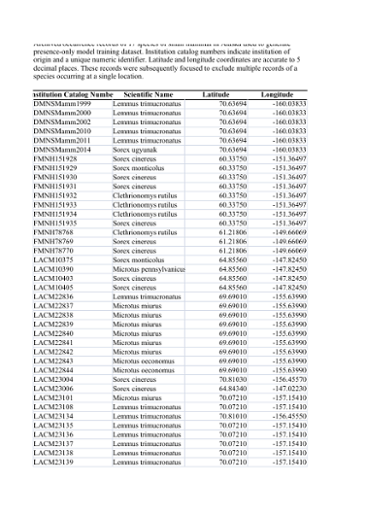 As anthropogenic climate change continues to alter biomes, ecosystems, and wildlife communities, determining how the niche spaces of species will respond is vital for determining appropriate conservation policy that promotes biodiversity and species persistence. In Alaska, quantifications of dietary patterns and geographic distributions of small mammals (rodents and shrews) are incomplete. As a result, wildlife managers are often ill-equipped to adequately account for these ecologically important taxa. I used stable isotopes, open-access occurrence records, and machine learning methods to model the dietary and geographic niche spaces of 17 species of small mammals in mainland Alaska. I also calculated the degree of niche overlap among species to estimate potential competition among conspecifics for both food and space. Using `bio-blitz' sampling along two statewide megatransects, I documented small mammal species richness and collected stable isotope samples at 20 locations across Alaska. Stable isotope (δ¹⁵N and δ¹³C) mixing models were used to define proportions of fungi, herbaceous plants, woody plants, lichens, and mosses in the diets of each species and to outline their fundamental and realized foraging niches. I created spatial distribution models for each species for the years 2010 and 2100 by applying machine learning methods to 4,408 unique occurrence records attributed with 27 and 33 environmental predictor variables, respectively. Spatial relationships between co-occurring species helped to determine the dominant structure of small mammal community assemblages for both time periods. Land change analyses identified regions of species loss, persistence, or gain over time. Stable isotopes (δ¹⁵N and δ¹³C) of shrews, rodents, fungi, and herbaceous plants were also modeled spatially to create continuous baseline isoscape predictions for Alaska. Dietary niche models showed a high degree of fundamental niche overlap among species at the statewide scale, whereas realized niches were more segregated at the study area scale. This suggests that species may be plastic in their use of shared resources in order to avoid competition. Isoscape models highlighted mid-elevations in the Yukon-Tanana Uplands, Brooks Range foothills, and the Yukon-Kuskokwim Delta as isotopic `hot-spots.' Isotope values were considerably higher than trophic baselines in these regions, indicating where small mammals may have been consuming more fungi than herbaceous plants. On average, 2010 distribution models accurately predicted the occurrence of species in the field 75% of the time, and a composite species richness model highlighted biodiversity hotspots (11-13 species) across the Yukon-Tanana Uplands and western Brooks Range. Community assemblage analysis for 2010 parsed species into 5 main community groups: northern, cold-climate, interior, continental, and southern, but membership to these communities was predicted to remain largely unchanged by 2100. Individual distributions, however, were predicted to change dramatically by 2100 as members of the northern, cold-climate, and interior communities shifted northward, inland, and upward in elevation following moving climate envelopes. Regions such as southwest Alaska and the Seward Peninsula experienced projected declines in species richness, while the number of species inhabiting the western Brooks Range and Alaska Range were predicted to increase. Results indicated that while species assemblages were robust in their organization over time, evidence of dietary niche plasticity suggests that communities may remain amenable to the addition of new species as shifting distributions overlap in new and unexpected patterns. Mid-elevations in topographically diverse regions such as the Brooks Range, Alaska Range, and the Yukon-Tanana Uplands will likely be centers for increased species richness and contact zones for novel species interactions in the future. These models, intended for public use, describe baseline conditions and future projections of small mammal niche ecology, with far-reaching implications for terrestrial trophic systems. I recommend that wildlife conservation and management decisions consider these models as we seek to describe and conserve biodiversity and the persistence of small mammal species across Alaska in a future altered by climate change.