Retrogressive thaw slumps and active layer detachment slides in the Brooks Range and foothills of northern Alaska: terrain and timing 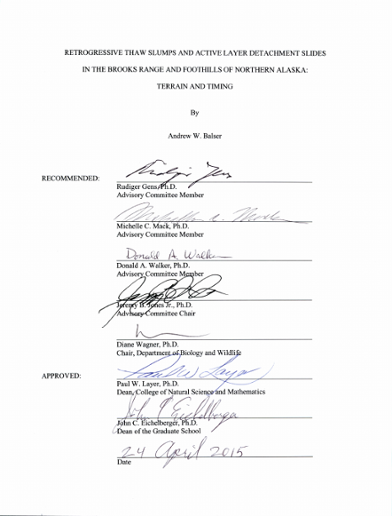 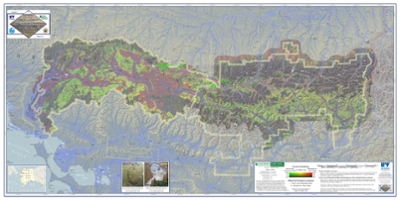 Permafrost degradation is widespread throughout the circumpolar north, occurring by multiple modes and mechanisms on many types of landscapes. The pan-Arctic rate of permafrost degradation is reportedly increasing, and permafrost carbon and nitrogen release are likely to be major contributors to global atmospheric greenhouse gas concentrations in coming decades. Locally, liberation of previously frozen substrates, organic materials, and nutrients alters the ecology of receiving streams, causes ecological and hydrobiogeochemical impacts in lake ecosystems, and impacts vegetation through disturbance, nutrient release, and succession on altered surfaces. Understanding the diverse modes of permafrost landscape response to climate, within time and space, is critical to questions of future impacts and feedbacks to climate change. Active layer detachment sliding and retrogressive thaw slumping are important modes of upland permafrost degradation and disturbance throughout the low arctic, and have been linked with climate warming trends, ecosystem impacts, and permafrost carbon release. In the Brooks Range and foothills study region of northwest Alaska, active layer detachment slides and retrogressive thaw slumps are widespread and prominant modes of permafrost degradation. Their distribution has been partially correlated with landscape properties, especially upper permafrost characteristics. However, drivers of active layer detachment slide and retrogressive thaw slump distribution and initiation triggering mechanisms, are poorly understood in this region, and detailed spatial distribution of permafrost characteristics is particularly lacking for the entire area. To better understand retrogressive thaw slump initiation triggers, this research used archived ERS-1 synthetic aperture RADAR data (1997-2010) to determine the year of first detection for 21 active retrogressive thaw slumps in the Noatak Basin, and examined weather records from remote and regional weather stations (1992-2011), along with satellite image-derived seasonal snowpack distribution (2000-2012) for correlations among weather, snowpack duration, and the timing of retrogressive thaw slump initiation. Most slumps first appeared within a 13 month span beginning June of 2004. Early summer 2004 was distinct in the weather records for anomalously warm early thaw-season temperatures, intense rainfall events in May, and unusually early dissipation of the annual snowpack. Results suggest that, regionally, retrogressive thaw slump initiation may be clustered in time, in response to seasonal shifts or anomalous weather events, and that future landscape response to climate change may depend on the nature and timing of climate change as much as overall magnitude. SS_para>The project examined inter-related and co-varying terrain properties at specific sites to identify relationships among terrain properties and permafrost characteristics. Consistent relationships among vegetation, surficial geology and permafrost characteristics were found using multiple factor analysis ordination of empirical data from diverse field sites throughout the region. Ordination results suggest relevant relationships among these factors to support regional-scale spatial analysis of terrain and permafrost properties. Field sites were also found to form consistent groupings from hierarchical clustering of ordination results, suggesting that relationships among these factors remain relevant across diverse gradients of landscape conditions in the region. Several thousand observed feature locations of active layer detachment slides and retrogressive thaw slumps were then used to examine region-wide terrain suitability based on terrain properties including: surficial geology, topography, geomorphology, vegetation and hydrology. Structural equation modeling and integrated terrain unit analyses confirmed and identified the nature and relative strength of relationships among terrain factors explaining observed feature distribution. These results may partially correspond with permafrost ground ice conditions as well, which is further supported by our ordination results. Analysis results drove mapped estimates of terrain suitability for active layer detachment slides and retrogressive thaw slumps across the region, enabling better estimates of permafrost carbon vulnerable to release, and ecosystems potentially impacted by these modes of permafrost degradation. Up to 57% of the study region may contain 'suitable' terrain for one or both of these features. Results support a 'state factor' approach as a useful organizing framework for assessing and describing terrain suitability, and for examining drivers of permafrost characteristics.

College of Natural Sciences and Mathematics
Theses (Biology and Wildlife)