Suggestions to Pioneer Farmers in Alaska 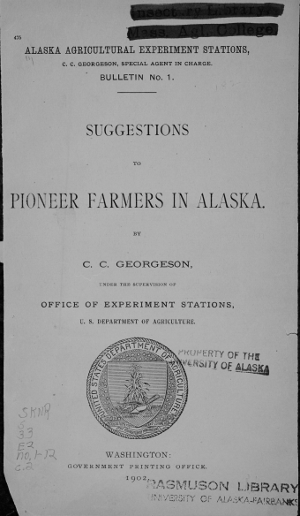 A study of the agricultural resources and capabilities of Alaska was begun under authority of Congress in 1898. Results of the earlier preliminary surveys seemed to justify the continuation and extension of the work and its establishment on a more definite and permanent basis. This has been carried out by the organization of a system of stations for observation and experiment at different points in the Territory which seem best adapted to the purposes in view. Stations have now been established at Sitka (the headquarters), Kenai, and Rampart on the Yukon. Five reports giving the results of the agricultural investigations in Alaska have been issued as Congressional documents and bulletins of the Office of Experiment Stations, U. S. Department of Agriculture. Those who have received these reports and who have noted the letters which are published in them from settlers in nearly all parts of the territory south of the Arctic Circle can doubt no longer that Alaska has agricultural possibilities. These letters bear testimony that hardy vegetables have been grown with marked success almost everywhere in Alaska where they have been tried, and that, likewise, early maturing grains have been grown successfully in many places (Pls. I and II). Potatoes, cauliflower, cabbage, kale, peas, lettuce, turnips, ruta-bagas, and radishes have been grown at nearly every white settlement in the coast region and in many places in the interior (Pls. Ill and IV). Early maturing varieties of barley, oats, and spring wheat have yielded well at Dawson, in the Yukon territory, and at Eagle, Alaska, near the Canadian boundary. At Rampart, on the sixty-fifth parallel, a station was established by the Department of Agriculture in the summer of 1900. Winter rye seeded there in August of that year lived through the winter under a good covering of snow; although the temperature fell to 70 degrees below zero, it came out in the spring in perfect condition and matured grain by the 1st of August, 1901. Barley seeded at this station in May was ripe by the middle of August. At the headquarters station, at Sitka, spring wheat has matured with good results for three years past, and barley and oats have been grown there for four years. These grains have likewise been grown successfully at the experiment station at Kenai, on Kenai Peninsula. Barley, oats, and wheat have prospered well at Copper Center, in the Copper River country, and oats have been grown to maturity on Steele Creek, a tributary of the Fortymile, in latitude 64°. Oats and barley have been matured at Skagway; Killisnoo, on the coast, and at Selkirk, on the Upper Yukon. The reports referred to give data from many other parts of the Territory which are proof that it is possible to farm successfully in Alaska if one understands the conditions and proceeds in his methods of work in accordance with the teachings of experience in Alaska. The pioneer who comes to Alaska to farm often finds that it is not safe to follow the customs with which he is familiar in regions farther south. The season is shorter than it is in the States and he must, in order to insure success, select early maturing varieties of both vegetables and grains. In the coast region the climate is wet and the soil is often water-logged, making drainage necessary in many places; Again, the pioneer soon learns that new soil, which contains more or less vegetable matter, does not yield satisfactory crops until it has been cultivated for two or three years. When he sows good seed on what appears to be rich soil, and the crop makes only an indifferent growth, he is apt to blame the climate for the result, when, as a matter of fact, the partial failure is due, in most cases, to the condition of the soil and not to the climate. These peculiarities in Alaska should be well understood at the outset, and it is chiefly to point out the causes of failure to those who have had little or no experience in Alaska, and to call attention to practical methods of doing the work, that these suggestions are offered.

Sir : I have the honor to transmit herewith for publication a bulletin containing some suggestions to pioneer farmers in Alaska, prepared by Prof. C. C. Georgeson, special agent in charge of Alaska investigations. The bulletin is devoted mainly to a discussion of the preliminary operations of selecting and preparing land for cultivation under Alaska conditions, indicating briefly the kinds of crops which have been found to succeed in Alaska and the methods of manuring which may be used with advantage in certain cases. The advice given is based upon the results of investigations carried on in the Territory since 1893, and it is believed that it will prove timely and useful to the increasing number of persons who are undertaking the home production of some of the necessities of life in Alaska. Very respectfully, A. C. True, Director.