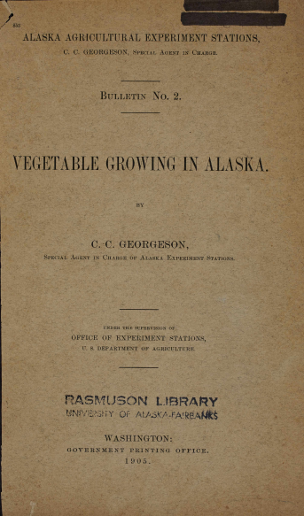 In this bulletin an attempt is made to present in an assimilated form what experiments and experience have taught as the best practice for vegetable growing in Alaska. It is of course understood that it is utterly impossible to give directions which can be followed in all places and under all circumstances. The Territory of Alaska is so extensive and the climatic conditions so variable that a practice which may be highly satisfactory in one section or in a given locality may result in total failure in others. Indeed, it is not infrequently the case that a practice which is successful in any given locality one year may result in failure the next year. This is the case, for instance, when the season is very wet one year and dry the next. In a wet season it is quite often desirable to raise the seed beds 4 to 6 inches by shoveling out the paths between them, but this practice is not a success in a dry season. It is therefore possible to give only general directions in a bulletin which is intended to be of use in the whole Territory. There are two factors which modify the practice in Alaska as compared with farming and gardening elsewhere; and these are (1) the climate, and (2) the soil. The Alaska climate has a reputation for rigor and inclemency on which it is not necessary to comment here. This fact is accepted as a matter of course. The fact that the soil differs in many respects from soil in more temperate latitudes is perhaps not so well understood. Such is, nevertheless, the case, and before one can work it successfully he must learn, either from his own experience or the experience of others, in what respects it differs from soil in lower latitudes.

Sir: I have the honor to submit herewith a manuscript entitled “Vegetable Growing in Alaska” and to recommend its publication as Bulletin No. 2 of the Alaska Experiment Stations. This bulletin gives suggestions regarding the choice of sites, preparation of soils, drainage, use of fertilizers, culture, etc., together with lists of vegetables that experience has shown are adapted to Alaskan conditions. The information is based upon experiments carried on during the past seven years at the several experiment stations and elsewhere, and it is believed that the dissemination of this knowledge will be of great advantage to the residents of the Territory. The illustrations submitted are considered necessary for the proper understanding of the text. Respectfully, C. C. Georgeson, Special Dr. A. C. True, Agent in Charqe. Director Office of Experiment Stations, U.S. Department of Agriculture, Washington, D. C.