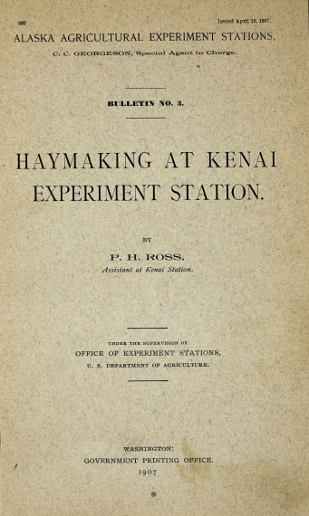 During the haymaking season the weather along the Alaskan coast is generally so unfavorable, with prolonged intervals of rain, a sun whose beams are daily growing weaker, and shortening hours of work, that the statement has often been made that the curing of hay in Alaska is impossible. A study of the weather record seems to confirm this statement. There are three conditions, however, applicable to the Cook Inlet region (and it is believed the first two at least will apply to the whole coast region) that tend to simplify the task of hay curing. First. The manner of precipitation. The rains are never dashing, but fall for the most part in a gentle drizzle. Owing to this, an ordinary cock of hay will withstand a long siege of rainy weather without becoming wet except for a distance of 3 or 4 inches from the surface. Second. The low temperature, which allows green or damp hay to remain in the cock for several days without heating or molding. Third. The southwest winds. The winds are always dry, of high velocity, and blow continuously night and day for three or four days at a time, thereby preventing dew and frost. These winds are more effective than the sun as a drying agent at this time of year. As a clear sky is almost without exception contemporary with a southwest blow, the value of these winds in haying time can be appreciated. Since the inauguration of the work at this station in 1899 the stock belonging to the station have been fed nothing but native feed. This has consisted almost exclusively of hay, and enough of it has always been cured to winter the stock comfortably. During the last two years the station has had about 25 acres under cultivation, and the bulk of this has been given over to growing grain hay. Special attention has been paid to hay curing during this time, and the following notes and deductions therefrom are written in the belief that they will be of practical value to the Alaska pioneer.

Sir : I transmit herewith a manuscript on haymaking at the Kenai Experiment Station, by Mr. P. H. Ross, the superintendent of that station, and recommend that it be published as Bulletin No. 3 of the Alaska Experiment Stations. The climate of the coast region is so rainy and damp that the pioneer often experiences great difficulty in curing his hay; in fact, haymaking in that region is considered by many to be well-nigh impossible, and it is therefore hoped that the experience at the Kenai station, as described herein by Mr. Ross, may be an aid to those who attempt to make hay under those conditions. At the Sitka Experiment Station, where the number of rainy days are even greater than they are at Kenai, excellent hay has also been made from native grasses on several occasions by following practically the same methods which Mr. Ross found to serve the purpose best. Hay can be made successfully throughout the whole region by taking advantage of the occasional periods of fair weather. It can not, however, be made on an extended scale by cutting down large areas at a time, as is usually done under more favorable climatic conditions. The area which can be successfully handled depends, of course, on the amount of labor that is employed, but usually it will be found safest to mow comparatively few acres at a time. Respectfully, C. C. Georgeson, Special Agent in Charge of Alaska Experiment Stations. Dr. A. C. True, Director, Office of Experiment Stations, U.S. Department of Agriculture, Washington, D. C.