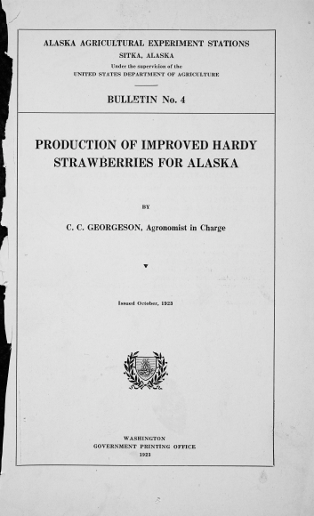 Alaska is a vast country of very diverse physiographic configuration, lying between latitudes 54° 40' and 71° 20' N. and longitudes 130° W. and 172° E., and covering an area of 580,000 square miles. It has two climatic belts, that skirting the Pacific Ocean along the coast region, and that of the interior. The climatic differences in these two belts are due to the grouping of mountain ranges. In the coast region the winters are comparatively mild, the summers are cool, the temperature ranging between 50° and 70° F., and in some places rising to 80° F., and the precipitation, averaging from 40 to 160 inches a year in different places, is conducive to a luxuriant vegetation. Southeastern Alaska, which is an extension of the coast range, is a rough, mountainous section valued for its minerals and its timber. There are only few areas of real farming land in this section, but there are, nevertheless, small tracts of land in valleys, bays, coves, and inlets which are suitable for farming on a small scale and especially for gardening. In the interior, a vast area lying north of the Coast Range Mountains, the winters are severe, the temperature occasionally falling to 65° below zero, the summers are short and uncomfortably warm, the temperature at Rampart frequently reaching 96° F., and the rainfall (including melted snow) is light, averaging between 9 inches in the Copper River Valley and 14 inches in the Tanana Valley in normal years. The growth of vegetation in the interior is not so luxuriant, but more nearly approaches that of the normal in the States. In the interior are many valleys which again differ from each other in climatic conditions. Such are the conditions that confront farmers and gardeners in Alaska. The common tree fruits, such as the apple, pear, plum, and cherry, have not as yet given much promise of success. Doubtless in time there will be developed by hybridization varieties which will be adapted to these climatic peculiarities. In favorable years some apples and cherries reach maturity, but ordinarily the summers in the coast region are not warm enough to mature these fruits. In the interior the summers are not long enough to mature fruits, and the trees freeze down to the snow line in winter. Although Alaska is not as yet adapted to fruit growing in a general way, it is adapted to small fruit growing—that is, to bush fruits. Red currants and raspberries are indigenous in Alaska and grow wild in abundance up to and beyond the Arctic Circle.