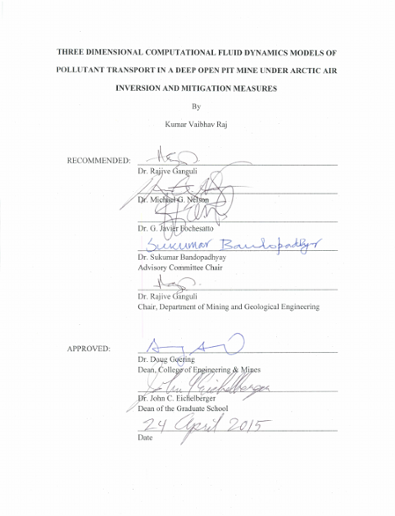 As open pit mines continue to grow deeper and productivity continues to increase, the management of air pollution can become challenging. One of the challenges, common during winter in deep open pit mines operating in the Arctic, is the occurrence of atmospheric inversion. In itself, inversion is not hazardous. However, due to the emission of gases and particulates during the mining process, the air within the pit can be severely contaminated, rather quickly, leading to serious health and safety consequences. The problem is complex and any solution approach will require a good understanding of the interaction of the aerodynamic movement of air, the air inversion process, the meteorology, the pollutant sources, and the application of mechanical ventilators in open pit mines. Scientific literature related to open pit mine ventilation, particularly with respect to air inversion, is practically non-existent in the English literature. This is perhaps the first account of a three dimensional computational fluid dynamics (CFD) model of pollutant transport in an actual open pit mine under an Arctic air inversion. Advanced technology has made computers faster and more powerful, which allows computational fluid dynamics (CFD) procedures to be applied to many air flow problems. Thus, a CFD approach can be used to understand the transport of contaminant in the pit during inversion by using several turbulence models. An array of data is required to develop CFD models for open pit mine ventilation. The meteorological conditions within deep open pit mines are significantly affected by temperature and roughness conditions, which ultimately generate complex dispersion phenomena including separation of air flow and its recirculation. For the application of CFD, various data such as pollutants concentrations, temperature, velocity, pit contours, equipment locations, and radiation (shortwave and longwave) were collected from the selected open pit mine and the weather stations located nearby. Analysis of the weather data showed that inversions are due to elevated inversions in the selected open pit mine. Because an exact flow situation in open pit mines is not known a-priori, open pit air flow simulation and pollution transport are often highly sensitive to the type of flow model employed. It is therefore necessary to investigate various turbulent models to identify the appropriate model that will simulate the flow phenomena with reasonable accuracy and predict the contaminant distributions within the pit. Dispersion models differ in their assumptions and structures as well as in the algorithm used and as a result, predictions vary from model to model. Furthermore, it is also important to investigate the behavior of a CFD model when simulating complex phenomena, such as the transport and distribution of contaminants in an open pit mine under an Arctic air inversion. The simulation of an enhanced period of turbulence in the stable boundary layer (SBL) is of particular interest because traditional air pollution dispersion models cannot explicitly treat intermittent turbulence events, and yet the SBL is often the worst-case scenario in open pit pollution transport.Realizable κ-ε and Large Eddy Simulation (LES) models were used for understanding flow of gaseous contaminants. The 2010 pit configuration was used to develop models for understanding the gaseous transport under air inversion. During an inversion, turbulence is dominant at the bottom of the pit, while in the middle portion of the pit turbulence is intermittent and flow over the upper portion of the pit is mostly laminar. The realizable κ-ε model tends to over-predict the contaminant concentration, whereas, the LES model under-predicts the level of pollutant concentrations. Validation of the developed model was performed using the 2013 pit configuration. Despite the complex synoptic situations, the different meteorological input data and the fast changing conditions, the simulation results from the validation model were in good agreement regarding the dispersion of pollutants and other turbulent variables. Pollutant concentration values in the selected locations showed differences, but remained within the same order of magnitude in most cases. Removal of the harmful pollutants from the pit is significantly important for the health and safety of the mine workers. The mitigation models were developed for both the 2010 and the 2013 pit configurations. Several remedial measures such as the use of mechanical ventilators in forcing and exhaust mode, push-pull ventilation and a novel approach of using cloud cover were considered. Mitigation efforts employing mechanical means were unsuccessful in removing or diluting the contaminants to a safe level. The novel approach of using cloud cover over an open pit mine showed promise. With this approach, the model showed that the inversion could be lifted and pit could be cleared of all pollutants.

College of Engineering and Mines
Theses (Mining and Geological Engineering)