Blubber and beyond: the role of lipids in thermoregulation and energy reserves of phocid seals 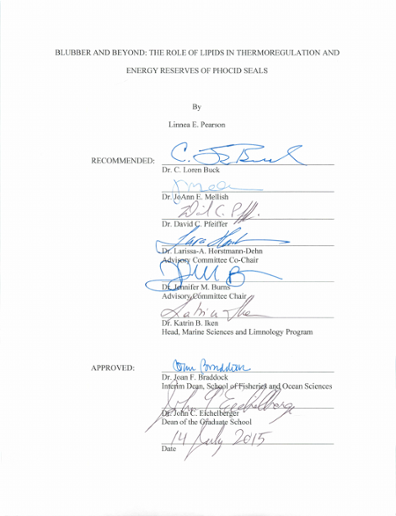 Phocid seals rely on lipids in the form of a blubber layer as insulation and lipids as energy sources in blubber and muscle. The amount and lipid composition of blubber and other lipid stores vary throughout life within and among species of phocid seals. I hypothesized that this variation in regulation, allocation, and interactions among lipid stores is influenced by species, ontogeny, and tissue-specific thermal regimes in polar phocids: harp (Pagophilus groenlandicus), hooded (Cystophora cristata), and Weddell (Leptonychotes weddellii) seals. I investigated the thermoregulatory strategy of neonatal harp, hooded, and Weddell seals, and throughout the transition to an aquatic environment in harp seals. All three species had similar thermal resistance, though it was achieved differently using either lanugo or blubber. While there was variation in the main thermoregulatory strategy among species, no species possessed all thermal adaptations of adults. Harp and Weddell seals had higher surface area to volume ratios (SA:V), thus higher potential heat loss, though compensatory mechanisms for heat production were different between species. Harp seals were the only species with the potential for nonshivering thermogenesis (NST) in brown adipose tissue (BAT), whereas Weddell seals had the highest potential for shivering thermogenesis (ST) in their skeletal muscle. Hooded seals relied on blubber, and had a significantly lower SA:V than the other two species. As harp seal pups develop, their potential for NST declines and they shift to a reliance on blubber for insulation. By late weaning, harp seal pups have similar insulative capabilities as adults, and can likely meet the thermoregulatory challenges associated with living in water. In neonatal and young seals that have little blubber, other lipid stores such as BAT and skeletal muscle lipids provide heat-generating mechanisms (NST or ST) to offset potentially high rates of heat loss. The potential for NST declines with age, as the blubber layer develops in harp seals, and weaned pups look to have similar insulative capabilities as adults. While phocid adults rely on blubber for insulation and maintain a thermal gradient across the tissue, otariids (fur seals and sea lions) instead maintain an external gradient across a thick fur layer. This has implications for the underlying lipid composition of blubber, as the fatty acids (FA) that make up this lipid respond differently to temperature. In phocid blubber, latitude (a proxy for environmental temperature) had a positive correlation with the proportion of polyunsaturated fatty acids, but a negative correlation with saturated fatty acids. In otariids, these trends were reversed. This suggests interactions between blubber and the ambient environment play a role in the overall relative proportions of FA classes in blubber. Unlike in blubber, the FA class composition of harp, hooded, and Weddell seal skeletal muscle was similar among species. In adult female Weddell seals, the relative proportions of individual FA in blubber and muscle were significantly different between tissues; these differences persisted across seasons, and were independent of female reproductive state. It appears that the FA in blubber and muscle reflect the tissues' roles within the body. Blubber contained a greater proportion of monounsaturated FA, which remain fluid at lower temperatures, while the muscle contains a larger proportion of SFA, which produce the greatest amounts of ATP per mole oxidized to support metabolism. In adult phocids, the FA composition of the blubber layer appears to be influenced by environmental interactions with latitude (temperature), in accordance with the location of and steepness of the thermal gradient through the blubber layer. Finally, environment looks to have little influence on the FA stores in skeletal muscle, and seasonally persistent tissue differences between blubber and muscle highlight how lipid is dynamically modulated within the body of phocid seals. How and what lipids are allocated to blubber is a mixture of abiotic and biotic cues throughout life, linked to thermodynamics, ambient environment, and energy dynamics.