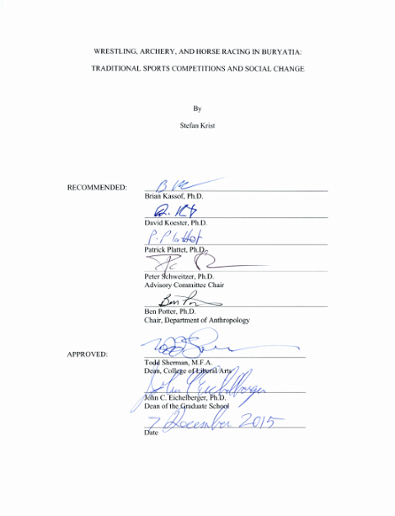 Sporting activities are examined in order to better understand a society's general socio-economic and political changes. The two basic research questions are the following: (1) Which economic, social, political, and cultural changes in and of the Buryat society were and are reflected in Buryat traditional sports? (2) How far and in which ways did and do Buryat traditional sports and the people engaged in them contribute to social change? Anthropological studies of play, games, and sport, an overview of which is presented in Chapter 1, have revealed that sports are closely linked and tightly entangled with the cultures and societies, in which they are performed. Thus, many features, values, world views, normative demands, and rules, effective in a society in general, are reflected by the sports engaged in by its members. Therefore changes observed in sports often reflect changes in society. Moreover, changes in society are often more readily apparent in sports than in other social spheres. This is because the social action a sport competition constitutes is limited in its range of time, space, number of acting persons and established rules. These limitations let it reveal the values, norms, rules, and power relations that operate a society much clearer than other, less limited social actions. In addition, a large portion of the research on games and sports shows that sports not only reflect, but have the capacity in themselves to create new values and behavioral patterns, thus can produce social change. The results of this study verify all these social properties and capacities of sports by using the traditional sporting activities of the Buryats as an example case. Chapter 2 provides the necessary background knowledge about the history of the Buryats. Chapters 3-5 outline the main features and the historical development of the three age-old traditional Buryat sports, bukhe barildaan (wrestling), sur kharbaan (archery), and mori urildaan (horse racing). Chapter 6 outlines the main characteristics and historical developments of the Buryat national holidays Eryn gurban naadan and Surkharban, during which competitions in these sports constitute the central activities. All these chapters, i.e. Chapters 3-6, describe the development from the sports' and festivals' ancient origins over their various utilizations by changing political and religious leaders to the present commixture of simultaneously re-traditionalizing and modernizing them. The analysis of these sports' rules, techniques, tactics, equipment, etc., and how they have changed over the course of time as well as how has changed, where, when, by whom and how they were organized, sheds clear light on historic and present socio-economic, political, and spiritual processes in Buryat society. Changing political leadership (from tribal chieftains over Tsarist rule, Soviet power, early post-Soviet liberality to today's omnipotence of Putin's party "United Russia") and respective ideologies, varying religious affiliations (shamanism, Buddhism, Soviet communist ersatz religion, and the post-Soviet stormy revivals of shamanism and Buddhism), changing gender relations (from a male dominated society to a more emancipated one and back again), changing values and normative demands (such as what garb athletes have to wear)--all that and more can be detected and determined in how in particular the competitions and festivals were and are carried out. That Buryat sport competitions and festivals themselves contribute to the production of social change is shown by their deliberate re-traditionalization and their re-embedding in religious rituals in the post-Soviet period. Due to massive support from the Buddhist clergy as well as from individual shamans, the three traditional sports have again become closely linked with Buryat practices of Buddhism and shamanism. Thus, because of their great popularity, these sports have vividly contributed to the post-Soviet revival and still ongoing flourishing of these two religions among them. The deliberate re-traditionalization of these sports supports a new arousing pride of being Buryat or, in other words, a re-construction of a Buryat national identity. Thus, Buryat traditional sports prove sports' capacity of indicating as well as actively contributing to social change.