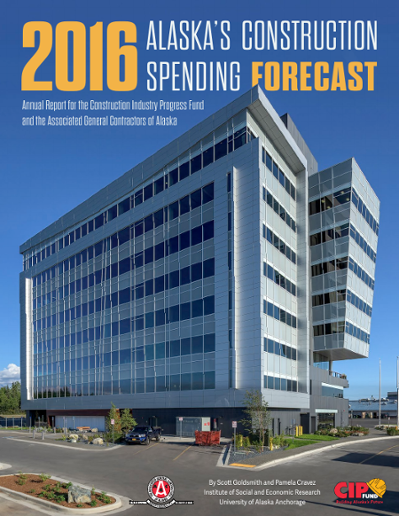 The total value of construction spending “on the street” in Alaska in 2016 will be $7.3 billion, down 18% from 2015.1,2,3 Oil and gas sector spending will fall 25% to $3.1 billion from its record level of $4.2 billion last year. All other construction spending will be $4.2 billion, a decline of 11% from $4.7 billion last year. Private spending, excluding oil and gas, will be about $1.4 billion, down 24% from $1.8 billion last year—while public spending will decline 6% to $2.8 billion from $2.9 billion. Wage and salary employment in the construction industry, which increased an estimated 6 percent last year to almost 18,000, will decline slightly in 2016.4 The decline in construction spending in Alaska in 2016 can be traced directly to the precipitous drop in the price of oil over the last 18 months, after the previous period of unprecedented high prices a few years earlier. In mid- 2014 the price was above $110 per barrel, but as this report is being written the price has fallen below $30 for the first time in 12 years. Furthermore, the short-term outlook is for the price to remain low, or even decline further, because supply continues to outstrip demand and inventories continue to accumulate. The longer term outlook for price also continues to fall, because of the resilience of production in the face of the falling price. The high price stimulated increases in construction spending across all sectors of the Alaska economy, particularly among oil and gas companies and the state government. The low price is now beginning to reduce construction spending within the economy, except for federal spending and spending by basic industries that benefit from lower oil prices. So far the price drop has been felt most directly in the oil and gas sector. Although many companies announced optimistic investment programs for 2016, most, if not all, have recently announced cutbacks or postponements. The longer the price remains low, the greater the likelihood of further cutbacks in the oil patch. Because of the oil price drop, a deficit of $2 billion opened in the state general fund in FY2014, and it has increased to $3.5 billion for each of the last two years. Although the state has been fortunate to have sufficient cash reserves to offset this revenue shortfall in the short term, it has meant a dramatic decline in new state funding for capital projects. Whereas the general fund capital appropriation in FY2013 was more than $2 billion, in this past year it was only enough to cover the required match on federal transportation grants. And looking ahead, there is very little prospect for a significant increase in the capital budget in the coming years. But the sharp decline in the state capital budget over the last three years has so far had limited effects on construction spending. This is because it takes considerable time for appropriated funds to become “cash on the street.” Several billion dollars of capital appropriations remain “in the pipeline,” which will keep state spending from falling dramatically this year. However, the amount of construction spending will be winding down in many communities like Juneau, Kodiak, and Fairbanks (excluding Eielson Air Force Base) because of declining state spending. Because of the size of the state budget deficit, it is possible that some projects in the pipeline that have not yet been approved could be cancelled. However, this will be moderated by concern over the negative impacts on the economy from such cancellations. Spending for national defense will be higher this year. And fortunately, federal spending not related to defense—mostly consisting of grants, both to the state for transportation (roads, harbors, railroad and ferry system) and sanitation projects and to non-profits for health facilities and housing—is not sensitive to the price of oil. Since 2013 the Alaska economy has underperformed compared with the national average in spite of the stimulus of high oil prices that led to record high levels of employment in the oil and gas and construction sectors. Job growth has been less than 1% annually and is forecast to be negative in 2016. State population has not increased in the last two years. This slowdown, combined with the heightened uncertainty about the future direction of the economy, brought on by the sudden fall in the oil price, will slow new private investment—particularly in the commercial and residential construction sectors as investors adopt a “wait and see” attitude, in regard to both the private economy and the ability of the state government to deal with the deficit. The decline in private construction spending this year is also partially due to the completion of a number of large utility and hospital projects. As in past years, some firms are reluctant to reveal their investment plans, because they don’t want to alert competitors; also, some have not completed their 2016 planning. Large projects often span two or more years, so estimating “cash on the street” in any year is always difficult because the construction “pipeline” never flows in a completely predictable fashion. Tracing the path of federal spending coming into Alaska without double counting is also a challenge, and because of the complexity of the state capital budget, it is always difficult to follow all the flows of state money into the economy. We are confident in the overall pattern of the forecast. However, as always, we can expect some surprises as the year progresses.