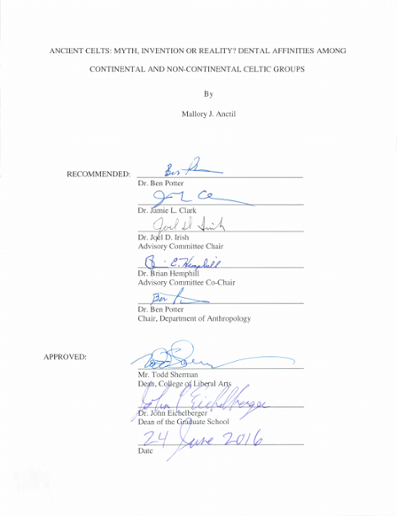 Dental anthropological study of the proto-Celts, and continental and non-continental Celtic tribes during the Iron Age, particularly its applicability in estimating biological affinities of these tribes, has been generally overlooked. The present study helps fill the gap in the current understanding of these groups in several ways. First, 36 morphological traits in 125 dentitions from four regional samples, representing the proto-Celts, the continental and non-continental Celts, along with a comparative European Iron Age sample, were recorded and analyzed. Frequencies of occurrence for each dental and osseous nonmetric trait were recorded for each sample. Second, the suite of traits was then compared among samples using principal components analysis, (PCA), and the Mean Measure of Divergence (MMD) distance statistic. Multidimensional scaling and cluster analysis were subsequently employed on the triangular pairwise MMD distance matrix to graphically illustrate the relationships between samples. These biological distance estimates suggest the following: 1) dental phenetic heterogeneity is evident across samples, 2) the proto-Celtic sample does not show any evidence of population continuity with the continental Celtic sample, 3) there is a significant difference between continental and non-continental Celtic samples, and 4) there is a comparably significant difference among the Celtic, proto-Celtic and comparative samples. Simply put, the comparative results suggest that these groups represent biologically distinct populations. These findings were compared with published cultural, linguistic, genetic and bioarchaeological information to test for concordance between dental analysis and other lines of evidence. Several previous studies defined the Celts linguistically, using languages to link all the populations. The present study does not support these findings, and suggests there is more genetic diversity than previously assumed under this linguistic hypothesis. Thus, it appears that the transition from proto-Celtic to Celtic culture in these regions, and the subsequent spread of Celtic culture to Britain during the La Tène period, may have been primarily a cultural transition. The present study comprises the most comprehensive dental morphological analysis of the Celts to date, contributes to an improved understanding of Celtic tribal relationships and microevolution, and provides an initial impression of Celtic relationships to other European populations during the Iron Age.