Back to the future: Pacific walrus stress response and reproductive status in a changing Arctic 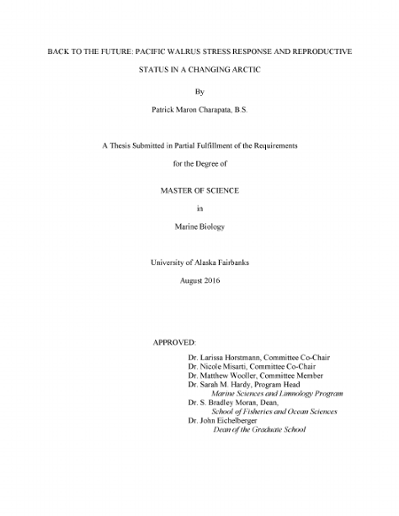 The Pacific walrus (Odobenus rosmarus divergens) is an iconic Arctic marine mammal that Alaska Natives rely on as a subsistence, economic, and cultural resource. A decrease in critical sea ice habitat and uncertain population numbers have led to walruses being listed as a candidate for the Endangered Species Act. However, there is no clear understanding of how walruses might be affected by climate change. The first objective of this study was to describe how bone steroid hormone concentrations relate to commonly used blubber and serum steroid hormone concentrations (i.e., cortisol, estradiol, progesterone and testosterone), because steroid hormones have not been extracted from marine mammal bone until now. Bone, blubber, and serum were collected from individual adult walruses (n = 34) harvested by Native Alaskan subsistence hunters during 2014 and 2015. Complete turnover of cortical bone in a walrus skeleton was estimated as ~33 years, approximately the lifetime of a walrus. Results showed bone and blubber steroid hormone concentrations were similar (P = 0.96, 0.51, 0.27 for cortisol, estradiol, and progesterone (males only), respectively), but not testosterone (males and females, P = 0.003) nor progesterone in blubber of female walruses (P = 0.007). Progesterone concentrations in males were significantly correlated between bone and blubber (R² = 0.51, P < 0.001). Estradiol measured in bone had high interannual variability (P < 0.001), indicating a shorter reservoir time in cortical bone compared with other hormones in this study, possibly due to local production of estradiol in walrus bone. Overall, bone serves as a long-term reservoir of steroid hormone concentrations compared with circulating serum concentrations. Progesterone measured in blubber can be compared with bone progesterone, but local production of estradiol in bone should be taken into account when interpreting these concentrations in cortical bone. The second objective of this study was to understand the physiological resiliency of walruses to the current warming in the Arctic. Steroid hormone concentrations were measured in walrus bone collected from archaeological (n = 38, > 200 calendar years before present (BP)), historical (n =135, 200 – 20 BP), and modern (n = 47, 2014 – 2015) time periods, but were also analyzed at a finer decadal (1830s – 2010s) scale. Walrus bone cortisol concentrations measured in modern-day walruses were similar to other time periods (P = 0.38, 0.07, for archaeological and historical time periods, respectively) indicating no increase in the stress response of walruses as a result of current sea ice conditions in the Arctic. Estradiol (females only), progesterone, and testosterone were significantly negatively correlated with walrus population estimates (P = 0.008, 0.003, <0.001, respectively). A negative correlation indicates that walrus population numbers are low when reproductive hormone concentrations are high, and population numbers are high, possibly at carrying capacity, when hormone concentrations are low. Data from the current decade (2014–2015) show that the current walrus population has lower reproductive hormone concentrations compared to times of rapid population increase. These data indicate the present-day walrus population may not be increasing, but is either experiencing low calf production and / or is near its carrying capacity. Overall, these data provide walrus management with insights into the physiological resiliency of walruses in response to arctic warming, and validate bone as a valuable tissue for monitoring long-term physiological changes in the walrus population.