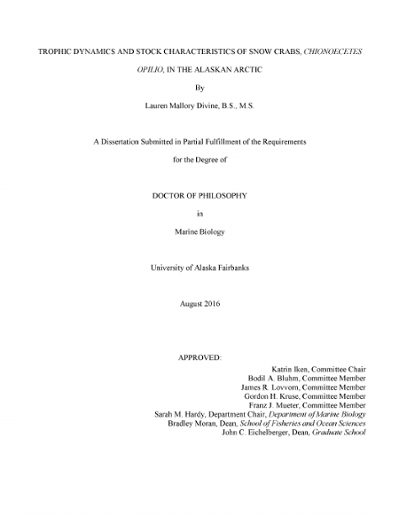 Arctic waters off the coast of Alaska have become increasingly open to human activities via dramatic climatic changes, such as reduced sea ice thickness and extent, warming ocean temperatures, and increased freshwater input. This research advances knowledge of snow crab trophic dynamics and stock characteristics in Arctic waters off the Alaska coast. Here, I provided baseline information regarding snow crab position in Beaufort Sea benthic food webs, its specific dietary habits in the Chukchi and Beaufort seas, and expanded upon previously limited life-history and population dynamic data in the Chukchi and Beaufort seas. I first detailed benthic food webs on the Alaskan Beaufort Sea shelf and snow crab trophic positions within these food webs using stable δ¹³C and δ¹⁵N isotope analysis. Water column and sediment particulate organic matter (POM) were used as primary food web end members. Isotopic niche space (δ¹³C – δ¹⁵N) occupied by benthic taxa provided measures of community-wide trophic redundancy and separation. Water column and sediment POM δ¹³C values generally reflected terrestrial POM inputs in the eastern and central shallow (14-90 m) Beaufort regions, but were indicative of persistent marine influence in the western and central deep (100-220 m) regions. Food web structure, as reflected by consumer trophic levels (TLs), trophic redundancy, and trophic niche space, supported the POM findings. In the eastern and central shallow regions, consumers occupied mainly lower TL (TL= 1-3), whereas consumers in the western regions occupied intermediate and higher TL (TL= 3-4). Overall trophic redundancy and niche space occupied by food webs in these four regions, however, was similar. The central deep Beaufort food web was unique in all metrics evaluated, and the comparatively largest isotopic niche space, with high trophic niche separation but low trophic redundancy, suggests that this region may be most vulnerable to perturbations. Snow crabs occupied food webs in the central deep and western shallow and deep Beaufort regions, where they maintained a consistent TL of 4.0 across regions. I then investigated snow crab dietary habits across the Chukchi, and the Alaskan and Canadian Beaufort seas in the size range of 40 to 130 mm CW using stomach contents and stable isotope analyses. Snow crabs consumed four main prey taxa: polychaetes, decapod crustaceans (crabs, amphipods), echinoderms (mainly ophiuroids), and mollusks (bivalves, gastropods). Crab diets in the southern and northern Chukchi Sea regions were similar to those in the western Beaufort Sea in that bivalve, amphipod, and crustacean consumption was highest. The Canadian Beaufort region was most unique in prey composition and in stable isotope values. Cannibalism on snow crabs was higher in the Chukchi Sea regions relative to the Beaufort Sea regions, suggesting that cannibalism may have an impact on recruitment in the Chukchi Sea via reduction of cohort strength after settlement to the benthos, as known from the Canadian Atlantic. Based on a comparison with southern Chukchi Sea macrofauna data, these results document the non-selective, omnivorous role of snow crabs across the entire Pacific Arctic, as well as providing first evidence for cannibalism in the Chukchi Sea. Finally, I generated new estimates of stock biomass, abundance, and maximum sustainable yield, length-weight relationships, size-at-maturity, and fecundity of snow crab in the Alaskan Arctic. Although snow crabs were more abundant in the Chukchi Sea, no crabs larger than the minimum marketable size (> 100 mm carapace width, based on Bering Sea metric) occurred in this region. Harvestable biomass of snow crabs only occurred in the Beaufort Sea, but was considerably lower than previous estimates in the Arctic FMP. Length-weight relationships were generally similar for male and female snow crabs between the Chukchi and Beaufort seas. Size-at-maturity and female fecundity in the Chukchi Sea were similar to snow crabs occurring in other geographic regions; low sample sizes in the Beaufort prevented size-at-maturity and fecundity analysis. Together these results contribute new understanding of Arctic snow crab population dynamics by utilizing a rich dataset obtained recently from the Chukchi and Beaufort regions.