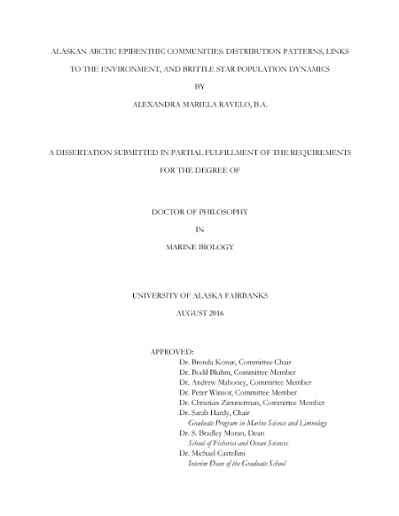 The Arctic marine shelves are characterized by areas of high and low invertebrate standing stock and communities that vary spatially in patches. Large-scale environmental characteristics, such as the distribution of water masses, the fenology of sea ice cover, and variability of water depth define changes in epibenthic community structure throughout the Arctic shelves. The longevity and relatively low mobility of epibenthic invertebrates make them especially relevant as indicators of long-term environmental patterns. In terms of standing stock and biomass, the most representative group among Arctic epibenthic taxa are brittle stars. Large areas of the Arctic shelves have dense assemblages of brittle stars; however, despite their ecological importance for Arctic shelf systems, little is known of their age, growth and turnover rates. The research developed through this dissertation examined how environmental drivers influence epibenthic invertebrate communities of the Alaska Arctic shelves and the population parameters of the dominant brittle star species. The first chapter of my dissertation focused on the northeastern Chukchi Sea and the second one focused on the Alaskan Beaufort Sea. The overarching questions addressed in chapters 1 and 2 focused on characterizing the epibenthic communities of the Alaskan Chukchi and Beaufort seas and defining environmental characteristics that influence the community structure. To answer this question, biological and environmental data were collected and analyzed in 2009 and 2010 in the Chukchi Sea, and in 2011 in the Beaufort Sea. For my third chapter, the overarching question was: what is the predictive power of the seasonality of sea ice for epibenthic community structure in the Alaskan Arctic, and how does it compare to more commonly used environmental descriptors. To test this relationship, six variables depicting the patterns of the seasonality of sea ice were computed from passive microwave sea ice concentration data. For the fourth chapter, the overarching question was, what are the population parameters of the two dominant brittle star species of the Alaskan Arctic. For this analysis, individuals of Ophiura sarsii and Ophiocten sericeum were collected in 2013 for age and organic mass determination. Findings of this research indicate that epibenthic communities have a patchy distribution with one or a few taxa dominating the community over large spatial extents. In both the Chukchi and Beaufort seas, communities were dominated by either crustaceans or echinoderms. Only in the mid-depth stations of the Beaufort Sea were both groups equally abundant. The environmental measure that best correlated to epibenthic commuity structure in both regions was longitude. Biologically relevant variables, such as sediment grain size, sediment phaeopigments, bottom water temperature and salinity, though region specific, were also important drivers of commuity structure. As predictors of epibenthic community structure, sea ice variables resulted in moderate to high correlation values. In the Beaufort Sea, sea ice variables performed better than traditionally used environmental descriptors; however, this was not the case for the Chukchi Sea. This study is the first to report on the age, growth and turnover of Arctic brittle stars. The asymptotic age was higher for O. sarsii than for O. sericeum; however, both species had significantly higher maximum ages than temperate region congeners. The individual production of O. sarsii surpassed that of O. sericeum by an order of magnitude throughout the size spectra. As a whole, this research highlights the complexity of the biological-environmental interactions that create the large spatial variability in community structure, benthic biomass and diversity throughout the Alaska Arctic. The variability in community structure throughout the Chukchi and Beaufort seas was linked qualitatively to large-scale environmental patterns. Quantitatively, these environmental forces were represented by the date of sea ice return and date of sea ice retreat in the Beaufort Sea. The predictive power of sea ice variables was reduced in the Chukchi Sea by the large inter-annual variability in wind direction and intensity that in turn affect the pattern of seasonality of sea ice. As integrators of large-scale environmental patterns, sea ice variables proved useful as additional predictors of epibenthic community structure. The dominant shelf brittle star species do not experience short-term fluctuations in population size. Top-down and bottom-up controls on these populations, such as predation and food supply, may be governing their growth strategy and total annual growth. Considering the longevity and slow growth of many Arctic epibenthic species such as brittle stars, the recovery after disturbance could require decades to restore high biomass in some areas. Environmental changes associated with climate change and resource development in the Arctic shelves have the potential to create large changes in the benthic system, such as local changes epibenthic community composition, dominant taxa, community diversity and benthic biomass hotspots. Future research focusing on the biological interactions that influence epibenthic communities, the supply and success of new recruits to the benthos and the temporal stability of epibenthic communities would help complete our understanding of the spatial and temporal variability of Arctic epibenthic communities and make solid predictions of future scenarios.