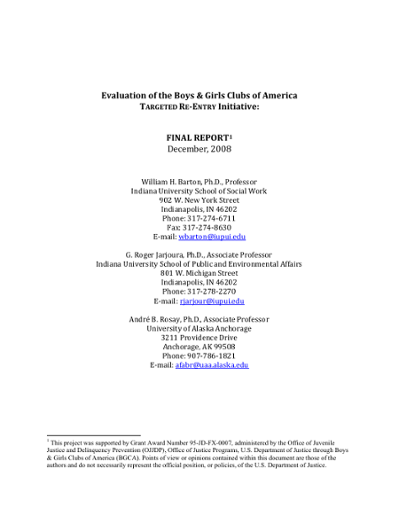 In 2003 and early 2004 the Boys and Girls Clubs of America (BGCA) introduced Targeted Re-Entry (TR), a juvenile aftercare approach derived from the Intensive Aftercare Program (IAP) model (Altschuler & Armstrong) into four sites, partnering with state juvenile correctional facilities in Mobile, Alabama; Anchorage, Alaska; Benton, Little Rock, and North Little Rock, Arkansas; and Milwaukee and Wales, Wisconsin. The Targeted Re-entry approach builds closely upon the IAP model, with local Boys & Girls Clubs providing community leadership, case management functions, and close linkages with the correctional system. A key element in all four sites is the introduction of a Boys & Girls Club providing recreational and other programming inside the juvenile correctional facility. By introducing the youths to the Boys & Girls Clubs’ philosophy and activities while they are incarcerated, providing (or participating in) the overarching case management prescribed by the IAP model, and connecting the youths to Boys & Girls Clubs back in the community as part of the reentry plan, TR staff hope to provide continuity and a positive youth development framework for more successful reentry. This study reports on an evaluation of TR for the four states, with a sample derived from all youth who had been identified since the beginning of the programs who were released from the institutions to the community phase no later than December 31, 2006, allowing recidivism and other outcome data to be collected for a 12-month post-release follow-up period.

Points of view or opinions contained within this document are those of the authors and do not necessarily represent the official position, or policies, of the U.S. Department of Justice.