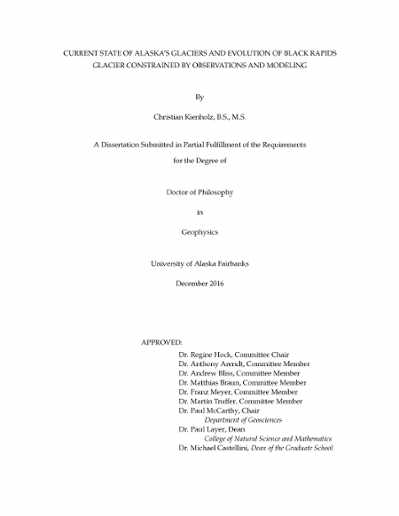 Glaciological studies rely on a wide range of input data, the most basic of which, accurate glacier extents, were not available on an Alaska wide scale prior to this work. We thus compiled a glacier database for Alaska and neighboring Canada using multi-sensor satellite data from 2000 to 2011. The inventory yielded a glacierized area of 86,720 km², which corresponds to ~12% of the global glacierized area outside the ice sheets. For each of the ~27,100 glaciers, we derived outlines and 51 variables, including centerline lengths, outline types, and debris cover, which provide key input for observational and modeling studies across Alaska. Expanding on this large-scale observational snapshot, we conducted two case studies on Black Rapids Glacier, Eastern Alaska Range, to assess its evolution during the late 20th and 21st centuries. Black Rapids Glacier, 250 km² in area, was chosen given its surge-type dynamics and proximity to critical infrastructure. Remotely sensed and in-situ elevation observations over the 1980--2001--2010 period indicated strong mass loss of Black Rapids Glacier (~0.5 m w.e. a⁻¹), with higher thinning rates over the 2001--2010 (~0.65 m w.e. a⁻¹) than the 1980--2001 period (~0.4 m w.e. a⁻¹). A coupled surface mass balance-glacier dynamics model, driven by reanalysis climate data, reproduced the glacier shrinkage. It identified the increasingly negative summer balances, a consequence of the warming atmosphere, as the main driver for the negative mass balance trend. Elevation observations in Black Rapids' surge reservoir suggested a surge was not imminent at the time of the analysis due to the lack of ice thickening. Re-initiation of sufficient elevation growth in the surge reservoir would require more favorable surface mass balances, as observed in the early 1980s. Compared to nearby Gulkana Glacier (a USGS benchmark glacier), the observed specific mass losses at Black Rapids Glacier were less pronounced, ~0.4 vs. 0.5 m w.e. a⁻¹ (1980--2001) and ~0.65 vs. 0.95 m w.e. a⁻¹ (2001--2010). The larger difference between the two glaciers' mass balances over the 2001--2010 period was partly caused by rockslide debris deposited on Black Rapids Glacier in 2002. This ~4.5 m thick debris layer, spread across 11.7 km² of Black Rapids lower ablation area, was modeled to suppress Black Rapids' glacier wide mass loss by ~20%. Modeling Black Rapids' evolution until 2100 suggested sustained glacier retreat, even under a repeated constant climate scenario, with ~225 km² of area remaining in 2100. Using a warming scenario (RCP 8.5), the modeled retreat was strongly accelerated with only ~50 km² of glacier area left in 2100. Given its thick, low-slope valley portion, Black Rapids Glacier is very susceptible to climate change. Its neighboring glaciers in the Eastern Alaska Range have similar properties, suggesting region wide glacier retreat in the future. To constrain this further, the Black Rapids case studies should be extended to the regional scale, a step now facilitated by the new Alaska wide glacier database.