Contrasting diet, growth, and energy provisioning in loons breeding sympatrically in the Arctic 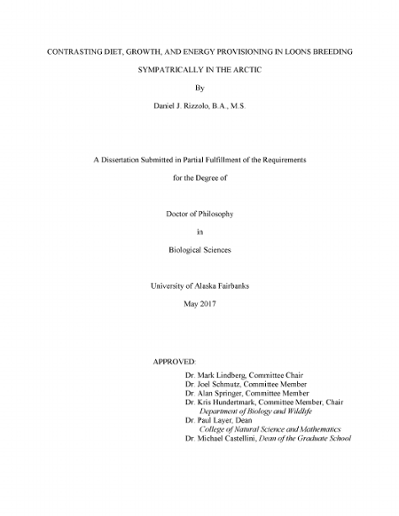 Red- throated (Gavia stellata) and Pacific (G. pacifica) loons breed throughout Arctic Alaska, often on adjacent lakes. Despite having similar life histories and distributions, these species have contrasting population trends in Alaska. Red-throated Loon populations have fluctuated dramatically over the past 3 decades, while the population trend of Pacific Loons has remained stable. These species-specific, population-level differences may be related to the foraging behaviors of breeding adults: Red-throated Loons feed on marine fishes using central place foraging behavior, while Pacific Loons feed primarily on freshwater prey captured from their breeding lakes. In this dissertation, I examined how differences in diet composition during the breeding season were associated with individual fitness parameters, namely adult body condition, chick growth performance, and breeding success. I used results from this research to address the hypothesis that interspecific differences in foraging behaviors contribute to the contrasting population dynamics of Pacific and Red-throated Loons breeding in Alaska. Using stable isotopes and fatty acid biotracers of diet, I found that the diet of breeding Pacific Loons was composed of a mix of freshwater and marine prey, and that variation in diet composition was related to the size of the breeding lake. Pacific Loons nesting on small lakes consumed more marine prey, suggesting that small lakes were not profitable foraging habitat, but their use for nesting was enabled by the close proximity of marine foraging habitat. In contrast, Red-throated Loons nested on very small lakes and ate a diversity of marine fishes. Despite differences in diet, both species had similar body condition during late-incubation, indicating that their diets met adult energy requirements, and adults maintained similar lipid reserves despite differences in foraging behavior. I found that Red-throated Loon chicks grew rapidly, yet were only 66% of adult body mass when they departed their natal lakes for the sea at fledging. This pattern of chick growth reduced the length of the postnatal period, and, consequently, the amount of time adults had to fly to marine habitat to capture fish for their chicks. Red-throated Loons provisioned their chicks with sufficient energy to support high growth rates. Other loon species which do not fly to the sea to capture fish for their chicks, like the Pacific Loon, likely do not face similar selection pressure for reduced parental energy investment through rapid chick growth. In Red-throated Loons, the total energy demands of chicks over the postnatal period were reduced at the expense of increased daily energy demands during the period of rapid growth. Given this pattern of chick growth, variation in the availability of high-energy content prey exerts a strong influence on breeding success. Pacific Loons provisioned their chicks mostly freshwater invertebrates with low-lipid content. Consequently, Pacific Loon brood provisioning rates were much higher than those of Red-throated Loons, which provisioned their chicks large-bodied marine fishes. Brood-rearing Pacific Loons commonly departed their breeding lakes for marine habitat, presumably to forage for themselves; however, parents rarely fed their chicks marine fishes, suggesting that central place foraging was not an energetically profitable provisioning behavior for larger-bodied Pacific Loons. Reproductive success over 3 years was higher in Red-throated Loons than Pacific Loons due to higher chick survival rates. Estimates of maximum energy provisioning rates for broods demonstrated that the provisioning rates and diet composition of Red-throated Loons could more easily meet peak brood energy requirements than the provisioning rates and diet composition of Pacific Loons. Thus, lower survival of Pacific Loon chicks was associated with lower maximum energy provisioning rates. The use of both freshwater and marine prey may insulate Pacific Loons from changes in either foraging habitat. Further, Arctic lakes provide a reliable source of invertebrate prey for chicks, but a diet of invertebrates may limit chick production rates because of their small size and low lipid content. Although meeting maximum brood energy requirement by provisioning freshwater invertebrates was difficult for Pacific Loons, particularly for adults rearing the maximum brood size of 2 chicks, chick production rates were sufficient to maintain a stable population trend. Red-throated Loons' specialization on marine prey strongly links their energy intake to the availability of marine fishes, which can vary suddenly and dramatically with ocean climate. Foraging conditions for Red-throated Loons in this study supported high chick growth rate and high chick production rates. Low chick growth rate and low chick production documented at other sites in Alaska indicate that Red-throated Loon breeding success is highly variable. Low chick production rates may contribute to Red-throated Loon population dynamics in Alaska if the availability of important forage fish species is low over multiple breeding seasons. Pacific Loons may be better suited than Red-throated Loons to adapt to the changing Arctic environment given the flexibility of their foraging behavior and diet. Because Pacific and Red-throated loon chicks in coastal tundra habitat rely on different types of prey, chick survival can function as a sensitive indicator of changes in lentic and marine habitats in the Arctic.

College of Natural Sciences and Mathematics
Theses (Biology and Wildlife)