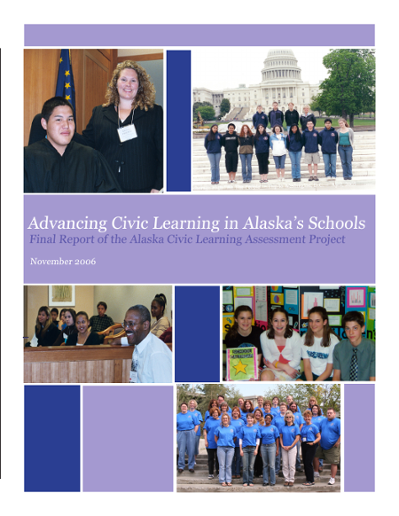 In late 2002, the Center for Information and Research on Civic Learning and Engagement (CIRCLE) and Carnegie Corporation of New York, in consultation with the Corporation for National and Community Service, convened a series of meetings involving some of the nation’s most distinguished and respected scholars and practitioners in the area of civic education. The purpose was to determine, based on solid data and evidence, the components of effective and feasible civic learning programs. Representing a diversity of political views, a variety of disciplines, and various approaches, these individuals shared a common vision of a richer, more comprehensive approach to civic education in the United States, notwithstanding some disagreement about aspects of how civic education should be conducted. Their final report, entitled The Civic Mission of Schools, is a compelling statement of the national landscape regarding civic learning and the critical role that schools play in fostering citizenship education. Below is an excerpt from the report’s Executive Summary: For more than 250 years, Americans have shared a vision of a democracy in which all citizens understand, appreciate, and engage actively in civic and political life. In recent decades, however, increasing numbers of Americans have disengaged from civic and political institutions such as voluntary associations, religious congregations, community-based organizations, and political and electoral activities such as voting and being informed about public issues. Young people reflect these trends: they are less likely to vote and are less interested in political discussion and public issues than either their older counterparts or young people of past decades. As a result, many young Americans may not be prepared to participate fully in our democracy now and when they become adults. Recognizing that individuals do not automatically become free and responsible citizens but must be educated for citizenship, scholars; teachers; civic leaders; local, state, and federal policymakers; and federal judges, have with the encouragement of the president of the United States, called for new strategies that can capitalize on young people’s idealism and their commitment to service and voluntarism while addressing their disengagement from political and civic institutions. One of the most promising approaches to increase young people’s informed engagement is school-based civic education. The CIRCLE report identified the following major reasons why schools are ACLAP Final Report & Policy Brief Page 2 important venues for civic education: • It is crucial for the future health of our democracy that all young people, including those who are usually marginalized, be knowledgeable, engaged in their communities and in politics, and committed to the public good. • Encouraging the development of civic skills and attitudes among young people has been an important goal of education and was the primary impetus for originally establishing public schools. • Schools are the only institutions with the capacity and mandate to reach virtually every young person in the country. Of all institutions, schools are the most systematically and directly responsible for imparting citizen norms. • Schools are best equipped to address the cognitive aspects of good citizenship—civic and political knowledge and related skills such as critical thinking and deliberation. • Schools are communities in which young people learn to interact, argue, and work together with others, an important foundation for future citizenship. As a result of the CIRCLE report, the national Campaign for the Civic Mission of Schools (CCMS) was launched in 2004, funded by the Carnegie Corp and the Knight Foundation (www.civicmissionofschools.org). The CCMS campaign is working with coalition members and advocates across the political spectrum to dramatically elevate civic learning as an educational priority. The ultimate goal of the campaign is to ensure that schools in the U.S. provide each and every student with a citizenship education that allows them to acquire the skills, knowledge and attitudes that will prepare them to be competent and responsible citizens throughout their lives. Such citizens are those who: • are informed and thoughtful about the history and processes of American democracy and public and community issues and have the ability to obtain information, think critically, and participate in dialogue with others who hold different perspectives; • participate in their communities through organizations working to address cultural, social, political, and religious interests and beliefs; • act politically using the skills, knowledge and commitment needed to accomplish public purposes such as group problem solving, public speaking, petitioning and protesting, and voting; and ACLAP Final Report & Policy Brief Page 3 • have moral and civic virtues such as concern for the rights and welfare of others, social responsibility, tolerance and respect, and belief in their ability to make a difference. As part of the CCMS campaign, competitive grants were awarded to 18 states for projects to advance civic learning. In September 2004, the Alaska Teaching Justice Network (ATJN), a statewide coalition of public, educational, legal, and judicial organizations and individuals dedicated to advancing law-related education in Alaska, secured a small grant from the campaign to conduct the Alaska Civic Learning Assessment (ACLA) Project. The goal of the ACLA Project is to better understand the current state of K-12 civic learning in Alaska and to assess the civic knowledge and experiences of Alaska's youth. The project has focused on both civics topics common across the United States and those unique to Alaska, with the goal of informing efforts to improve civic education in the state. After a brief overview of national research on civic education, this report presents findings from the ACLA Project research on the current status of civic education in Alaska, the civic knowledge of youth and adults, and the attitudes about civic education held by educators, youth and elders.