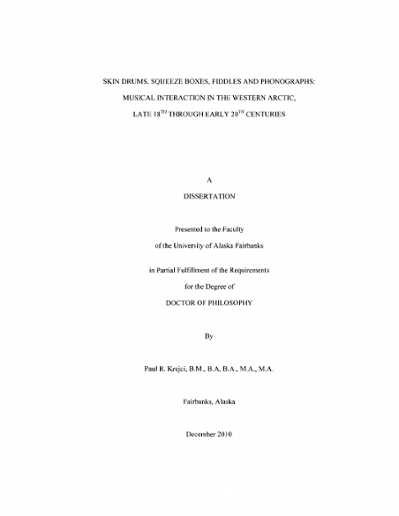 This dissertation explores the nature of early globalization in the Western Arctic with a focus on musical interaction between indigenous and foreign populations during the late 18th through the 20 th centuries. The region experienced an unprecedented amount of cultural contact represented by various cultural groups including Native Alaskan, Canadian, Chukotkan, European American, African American, Latin American, Asian American, Oceanic peoples and others. Numbering in the thousands, natives and non-natives developed continuous and long-term relations working as explorers, whalers, traders, missionaries, miners, hunters, trappers, seamstresses, educators, law enforcement officials, and scientists. The Western Arctic's ethnically diverse population, relatively harsh physical surroundings, and absence of a common language allowed musical activity to serve as an important means of communication and increase awareness of the world. Music and dance helped to promote social bonding, trade, and religion. They also expressed cultural identity and contributed to ethnic differentiation. An examination of this musical interchange forms the first part of this study. Local indigenous communities during the late 18th, 19 th, and early 20th centuries interacted most extensively with the influx of explorers, commercial whalers, traders, and missionaries. Throughout the year but especially during the long winter season, these groups often participated in formal, informal, and impromptu gatherings featuring various types of music such as indigenous drum dance and song, folk, popular, church, and classical. Musical instruments including frame drums, fiddles, accordions, harmonicas, organs, pianos, guitars and devices such as phonographs, organettes, and music boxes played an essential role in musical exchange. Just as significantly, these objects also ranked as some of the region's more popular trade commodities. Perceptions of northern indigenous peoples through music and dance constitute a second part of this study. Outside fascination with the Arctic and its inhabitants as reflected in the many examples of late 19th and early 20 th century sheet music, piano rolls, and recordings suggest that cross-cultural interests, though often superficial and caricatured, were also reciprocal. Early musical representation of Arctic culture via southern compositions and performances shares crucial links to the expansion of globalization in North America and beyond.